Ved Patel struck the only century of the tournament.

USACA North West Region (NWR) conducted its under-14 trials on May 14th and 15th to select a team that will participate in the USACA National U14 Tournament, which will take place from July 6th – 9th in Bolingbrook, IL.

“We are proud of competitive and stringent selection process we have put in place. This year, we hired a baseball fitness screening company to measure fitness of each player and submit their report”, says Hemant Buch, USACA NWR Chairman for last 8 years.

Six teams participated from various youth programs of the Region – SRCA, CCA, BACA Youth and a team from Seattle. On Sunday 14th, the trial began with fitness screening, then a total of nine, twenty-five over games was play among those six teams. Selectors Vijay Goel and Vishwa Gaddamanugu watched every player perform.

CricHQ was official scoring platform and they did an excellent job of supporting our tournament by creating tournament page and defining the fixtures. Their support enabled accurate data collection.

Tournament scores and details can be found here – https://www.crichq.com/#competitions/8303/draws/23373/rounds 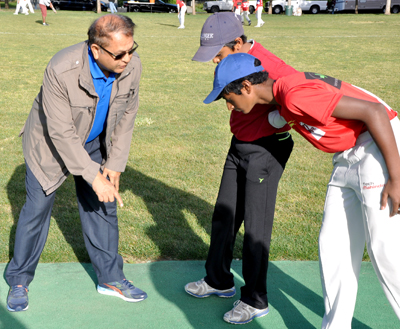 Two captains at the coin toss.

CCA Centurions emerged as winner of the tournament. Ved Patel hit the tournament only century while Abhishek K. Rahul and Rajat Sood all scored more than 100 runs from three games. Arnav Kothapally and Akhil Arunachalam were the top wicket takers with six wickets apiece.

CCA Falcons were number two in the ranking. Newly formed San Ramon teams put up a great show and were third. Seattle team showed remarkable improvement, thanks to the commitment of their organizers and parents. Special thanks to Sacramento Cricket Association and BACA for putting up a combined team with CCA.