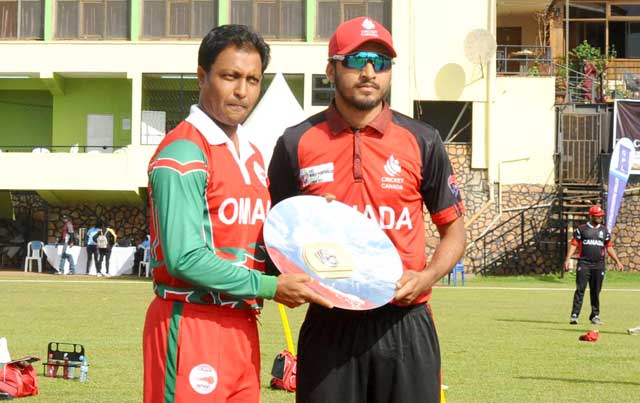 Oman continued its meteoric rise by winning the ICC World Cricket League Division 3 after a rain hit day in Uganda, while Canada secured the runners-up position.

Oman faced Canada in the final of Division 3 in a fight to be crowned champions at Kampala in a reduced overs match.

Canada, batting first scored, 176 runs for three in its 38 allotted overs. Bhavindu Adhihetty batted excellently to score 86 from 108 balls, including ten fours, and featured in a 102-run first wicket partnership with Nitish Kumar (50). Navneet Dhaliwal (13) and Dhanuka Pathirana (21 not out) performed well to get Canada to a competitive total.

In reply, Oman’s Zeeshan Maqsood scored a quick-fire 32, including four fours and two sixes, but the rain set in and play was abandoned after 4.3 overs.

Oman was crowned winners of Division 3 by virtue of the round-robin standings, which meant Canada had to settle for the runners-up spot.

The winning Oman captain Sultan Ahmed said: “We are glad to win the tournament. I think it is a big achievement for us. We were waking up at 5am every morning, then going to work and returning to the field to do some fielding drills in the evening in Oman. We have played together for some time and gelled well. 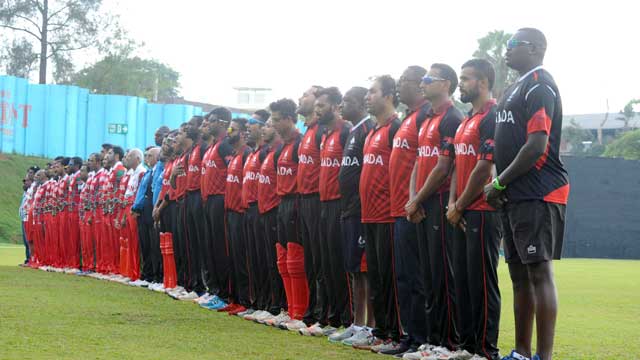 The two finalists Oman and Canada lined up prior to the final.

“Before we came here, we played practice games in Kenya and also in UAE. Our first win against the USA was very important because in any tournament you want to win the first match. We played that one like champions. We have not made changes to the squad over the last 10 years and I am privileged to captain both in the T20 and 50-over format. What has kept me going is the cooperation from everybody.”

Duleep Mendis, the Oman coach, said: “I think the boys deserve that. We were seeded number-six when we came here but then we won the tournament. Our target was to get to Division 2 before the end of 2017, it is a bigger stage but we have played those teams before so we are confident looking ahead.”

Nitish Kumar, Canada captain, was happy with his team’s overall performance in the tournament. “We played well today, but rain came in to play. We can’t really read much into the final today because the game was abandoned. We have kept moving forward the whole tournament. We are happy because we kept adapting to the situations – the conditions and teams. For example Singapore and Malaysia played well against us, but we adapted well and overcame then.”

Canada coach, Henry Osinde reflecting on the tournament, said: “Overall, we played well so I will not say we are disappointed. The big aim was to qualify and then go on to win the tournament. Today, we batted well 176 in 38 overs but the rain gods had different plans and the game was abandoned. We lost our easy games and they went ahead of us so I give them full credit for winning the tournament.”

The match between USA and Singapore only managed to get in 25.2 overs before the rain set in. Sagar Patel (36 not out) and Alex Amsterdam (24 not out) both looked in good form, but then the storm clouds gathered and the players were called off with USA 95 for two, before the match was abandoned.

The positions on basis of the round-robin table meant Singapore finished third and USA fourth.

The final match of the day Uganda v Malaysia was abandoned without a ball being bowled. Uganda finished fifth and Malaysia sixth.

Final standings as per round-robin table after round 5 matches below: