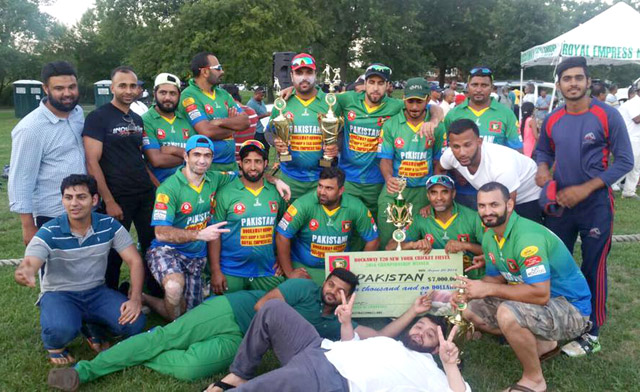 The victorious Pakistan team poses with winning trophies and check.

By Sam Sooppersaud
Pakistan became the champions of the inaugural Rockaway T20 NY Cricket Fiesta, when they were successful in harnessing a storming Guyana batting machine, in an exciting run chase. With one over to go, the game was poised; both sides had an equal chance of becoming the victors. Both played their hearts and energy out, but Pakistan gained the upper hand by putting in “just a little more elbow grease” than their opponents.

Saturday, August 20, 2016, was indeed a day for a cricket fiesta for hundreds of cricket fans that showed up at the Baisley Pond Park (BPP) in Queens, New York, to watch the crowning of a champion. The fans were not short-changed. They “got their money’s worth.” They saw two exciting cricket matches, with both being decided in the last over of the matches.

At 10:00 AM Guyana took on Bangladesh in the semi-final clash. Pakistan had already booked its place in the final by topping the tournament in the preliminary rounds. It was a game that swung like a pendulum from one side to the next, and back again, a few times. There were several anxious moments for players and fans from each side, when it appeared that their team was slipping. 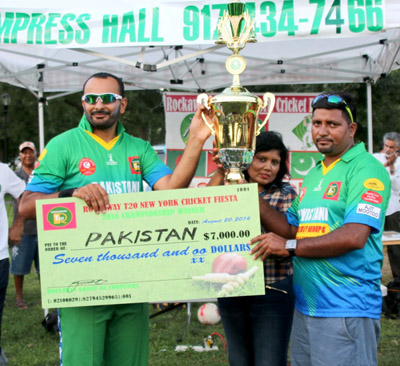 Bangladesh batted first and scored 163 runs. The average number of runs scored at the BPP during the tournament was 162. However, a much larger score was predicted, but Guyana was able to restrict the scoring in the later overs.

With 164 runs for victory, Guyana had their task set out before them.  But losing lots of wickets in their inning was not how Guyana had planned their reply. With eight wickets down, Guyana needed 65 runs for victory. The recognized batsmen were back in the showers. But a ninth-wicket stand of 68 runs saw them through.

The tournament final pitted Guyana against the powerhouse Pakistan batting machine. Taking first knock, Pakistan piled on the runs.  67 runs came in the first five overs. The commentators, at this stage predicted a score of over 250. But then Pakistan lost some quick wickets. Four wickets fell in the middle for a mere 11 runs within three overs. Pakistan ended their inning at 203 for the loss of nine wickets.

Have to score 204 runs for victory on a wicket where the average score was 162 runs, was a tremendous task for Guyana to overcome. It seemed that the scoreboard pressure was too much for the Guyanese to handle. Within five overs they were 41 for 4 wickets. It appeared that Guyana would crumble without a fight. Then Wasim Haslim and skipper Karan Ganesh pulled their team back into contention. They soon lost the upper hand once more, with the pendulum swinging from Guyana to Pakistan, back and forth.

With 24 balls remaining, Guyana needed 36 runs. This soon became 16 runs needed in 12 balls. Pakistan literally won the game in the penultimate over when they conceded only four runs off the first two balls. The next four balls were dot balls. The Guyana batsmen had fallen asleep. First ball off the 20th over was a wide. The next one was a boundary. It was then seven runs needed in four balls. Then two runs were needed in three balls. Three dots balls later Guyana fell tamely. 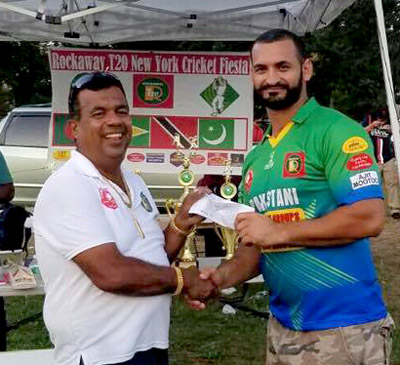 Abdullah Syed (right), MVP of the final, collects his check from tournament sponsor Hafeez Ali for the nine sixes he struck which earned him $180.00.

Looking back, it was felt that Guyana threw the game away. There were at least four singles that could have been stretched into doubles, had the runners been so inclined. Then again, with the game balanced, Pakistan was guarding the boundary, with five sweepers along the ropes. Yet the Guyanese were literally slamming the short balls, which raced along to the fielders in the deep, resulting in only singles. Commentator Jamie Paul Lloyd remarked that” I can’t understand it. Why don’t the batsmen simply play the ball softly, and with the heavy field, they could scamper through for two runs easily.” This fell on deaf ears. The Guyana inning ended at 159 runs, and so did their hopes of winning the Rockaway T20 New York Cricket Fiesta inaugural championship.

On Friday, August 26th, the Rockaway T20 formal presentation will be held at the Royal Empress Hall, 122nd Street and Rockaway Boulevard, Queens, New York. Outstanding performance awards will be made to players, the champions and runner-up. Among the awards expected to be distributed are Best Batsmen, Best Bowler and MVP of the Finals. An MVP award for the tournament, and of course the checks and trophies for the champion and runner-up.

The feedback coming from the fans is that this was one of the best-organized and well-run tournaments that they have ever witnessed. The organizers are committed to next year’s tournament, and have promised an even better tournament.