By Stan Walker
Professor Sir Hilary Beckles, Vice Chancellor of the University of the West Indies was inducted into the world’s first Cricket Hall of Fame, which is located in Hartford, Connecticut, at a special ceremony that was held at the Hall on Wednesday, March 1. Sir Hilary was honored because of his outstanding contributions to the sport. 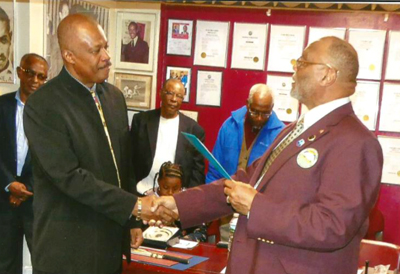 Michael Chambers, right, president of the Cricket Hall of Fame inducts Sir Hilary into the Hall of fame.

A former member of the West Indies Cricket Board (WICB) Sir Hilary is the founder and director of the CLR James’ Center for Cricket Research at the Cave Hill campus of the university, the inaugural chairman of the High Performance Cricket Academy of the WICB and Vice President of the Commonwealth Sports Ministers Advisory Body on Sport and   Development.

Born in Barbados, Sir Hilary in thanking the Hall of Fame’s committee for what he described as a tremendous honor said that from an early age, he always wanted to be a cricketer. “At the age of 13, I migrated with my family to England and it was then that I got heavily into the game,” he said. “While there, I became an outstanding player while in school, made the English Youth Team and eventually played at the semi-professional level in the Yorkshire league.”

On his return to the West Indies, he became captain of the team at the UWI’s Mona campus, and the first principal to compete with his students to get to play on the team. He also played in Barbados and his team there has broken all the records in the region, he said.

Sir Hilary, who retired from playing in competitions last year (2016), said that his only regret is that he did not get to play for the West Indies. The UWI has a role to play in the development of West Indies cricket, Sir Hilary said and that he has done his best to help West Indies cricket. I have also helped to prepare the players to become captains, he stated.

Speaking on the present situation of the sport in the West Indies, he said that we are well on our way to get back to being one of the top teams in the world. We are now producing some good players and he expects this to happen very soon.

At the ceremony Councilwoman rJo Winch presented him with a citation on behalf of the City Council and a proclamation from Hartford’s Mayor Luke Bronin, who congratulated him on his induction into the Hall, cited his “global service in the cause of social justice, peace and sustainable development” and declared the day, March 1, as “Sir Hilary Beckle’s Day” in the city of Hartford. Hall of Famer Barbara Lindo, Sportmen’s Athletic Club’s Sports Coordinator Patrick Hamilton, Dr. Doreen Crawford, Principal of the Martin Luther King Jr. Elementary School and Nicone Gordon, past president of the West Indies Social Club, presented the Professor with congratulatory citations.

At the conclusion of the ceremony, Sir Hilary was taken to the nearby West Indian Social Club, where he enjoyed a very exciting session in which he was able to meet and be greeted by a number of West Indian residents in the city.

A distinguished university administrator, economic historian and specialist in higher education and development thinking and practice, and internationally reputed historian, Sir Hilary responded by giving them a brief background of how he got to where he is today.

Sir Hilary’s visit to the Greater Hartford area came about because of the Central Connecticut State University who had him as the guest speaker at their Amistad Lecture. The University honored him with the historical Amistad Award which is conferred in recognition of his outstanding contributions to historical knowledge and the struggle for human rights and social justice.

In 1839 the Slave Ship “Amistad” arrived in the USA with 53 Africans. With the help of anti-slavery activists, and the legal advocacy of former President John Quincy Adams, the captives were able to litigate to gain their freedom.