By Nikhil Sikka
On May 13, after a rather rainy and cold week in New England, the Gods finally relented and provided a less than perfect Saturday for a Division A  Massachusetts State Cricket League (MSCL) match played between Boston Eagles (formerly known as Eagle A), and the New England Cricket Club Stars (NECC). NECC won the toss and elected to field first. Raghunandan Sridhar (Raghu) and Mithun Reddy opened the batting for Boston Eagles. With the benefit of past experience to fall back on, Raghu took time scoring mostly singles and doubles in the first four overs. At the other end, Mithun took a more breezy approach, scoring 11 off the first 10 balls. 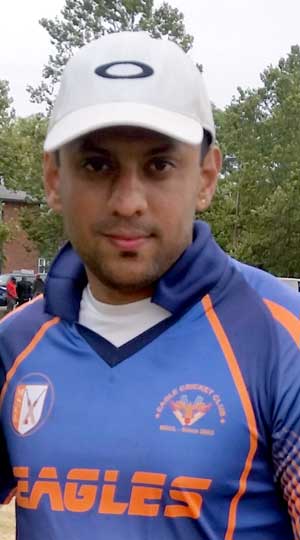 But this was just the quiet before the storm. And what a perfect storm it was that followed. Without making any agricultural cross-batted swings the duo proceeded to scythe through the NECC bowling, peppering the boundaries with cover drives, flicks, and cuts of the finest quality. When in form, Raghu is a sight to behold. Mithun was no less with his aggressive batting style and was the first to complete his 50. Over 17 overs, the duo put on 100 runs with both players contributing equally to the score. Raghu finished his half century not long thereafter. Mithun took up the onus of accelerating the scoring by threading drives through cover, long-on, and mid-wicket. Raghu, on the other end, looked as elegant as ever and waited for the bowlers to come into his zone, cutting through square and flicking through midwicket-square leg when the ball was on the stumps. The opening partnership finally broke in the 23rd over when Mithun perished after trying to launch Aravind Swaminathan through the fine leg to be safely caught by Abhijit Warke (76 runs in 69 balls).

The opening duo put together 157 runs, a rock solid start which the Boston Eagles middle order batsmen couldn’t entirely capitalize on. They struggled to keep a partnership going after Mithun got out and lost three of their fairly skillful batsmen in quick succession. The only constant on the crease was Raghu who looked in as threatening touch as anyone on the day, caressing boundaries intermingled with hard-run 2’s and 3’s.  With the score already in the region of 200, Suhas who came in as the 4th down batsmen did not waste any time getting his eye in, hitting 8 of the first 3 balls he faced including a massive six to the fence. Actually, why stop there? He hit 16 of the 9 balls he faced with another huge hit over the fence. Just the type of finishing touch an inning needs. However, he couldn’t stay for long and was caught on a rather quick delivery by Aravind. Boston Eagles lost one more wicket while Raghu finished his ton. With a few overs left, AK Memon and Raghu kept moving the scoreboard along by hitting the balls in spaces for quick 1’s, 2’s and occasional boundaries. The result was massive 267 runs (6 wickets) in 40 overs with Raghu’s best MSCL batting performance thus far (131 not out on 125 balls).  For NECC stars, Kapil Kulkarni took two wickets. 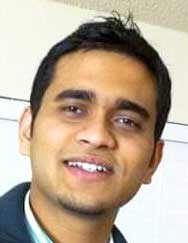 Mithun Reddy shared an opening partnership of 157 with Raghunandan Sridhar.

Chasing a mighty 267 down in a field with thick grass would require a special effort. 268 to win in 240 balls, 10 wickets in hand. A walk in the park. In heavy rain. Sivakumar Murugesan and Raghuram Arakalgud started the batting line up, however, the NECC inning got off to a pedestrian start. With Nikhil Sikka as a natural out swinger fast bowler on one end and Varuna Aiyanna holding forth on in swing deliveries on the other, the opening bowling duo didn’t give much room to NECC batsmen to feel comfortable on the crease. NECC lost two important wickets early in the inning before even the power-play ended (1 for Nikhil and 1 for Varuna). Guruprasath Madhavan, with his deceptive off-spin bowling, took care of the middle border batsmen and provided Boston Eagles with 2 important wickets. 100 for 5 in 19.2 overs. 168 runs required in 120 balls, 5 wickets in hand. A walk in the park. During a thunderstorm.

Raghuram Arakalgud showed persistence and kept rotating the strike with occasional boundaries; however he was unable to stitch a meaningful partnership with any of the NECC’s middle order squad. Suhas Bhanushali, an MSCL veteran, frustrated the NECC batsmen with his unorthodox bowling style and annoyingly slow deliveries. He finally got Raghuram out at 46 who ended up being the highest scorer for NECC. AK Memon’s leg-spin provided the final blows and he took a couple of quick wickets showing no mercy to the NECC tail-end batsmen. 150 for 9 in 29 or so overs. 118 runs required with 1 wicket in hand. A walk in the park. During a hurricane.  Kapil Kulkarni tried to muster some runs towards the end but in-form Guruprasath Madhavan finished the business with his third wicket of the day and got Kapil (25 runs) edged out straight to Raghu. NECC innings finally folded for 168/10 in 32.4 overs.

A well-deserved win by Boston Eagles which was impeccably led by skipper Raghu.

We would like to encourage other teams and leagues to send us their reports, you can email us at usacricketers@gmail.com.