By Sam Sooppersaud | Scorecard | Photo Gallery
The Baisley Pond Park Cricket Field, at Baisley Boulevard and 150 Street, in Queens, N.Y. never looked so “spruced up” for a cricket game. I mean that Joe Sieuharack had done a fantastic job with the preparation. The grass was manicured; though the outfield looked a bit on the dry side, due to the lack of watering, and the very scorching weather, as of late, the playing was very inviting for a cricket match. 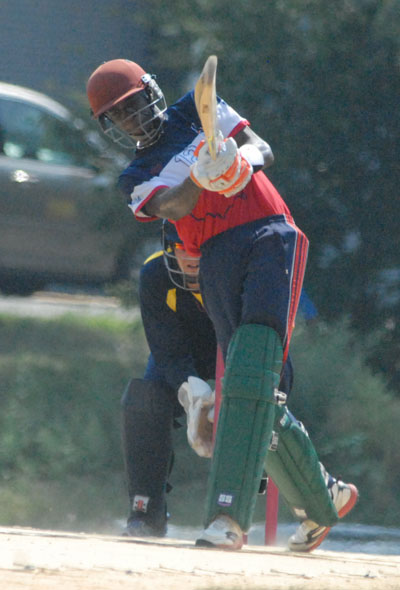 Randall Wilson during his knock of 76.

The strip in the middle had some special attention from Joe. He had trucked in some dirt and levelled off the bowler’s run-up. He even installed new indoor/outdoor carpet on the run-up, on both end of the pitch. No longer were the bowler’s boots kicking up dirt and dust. Even the boundary ropes around the playing area were brightened with a coat of white paint. Joe did a tremendous job preparing for game. The day was Saturday, September 10, 2016. The game, the Marylebone Cricket Club (MCC) from London, England vs. a Select New York XI.

It is said, and truly so, that “catches win the game”. At least, the results of a cricket game may be greatly influenced by what fielders do with catches offered.  Take the catches and restrict the batting from amassing a high score. Conversely, grass the chances and allow a higher score than should have been. Well, the MCC fieldsmen grassed a possible six chances that were offered by the NY Select batsmen.  This, coupled with several misfielding, accounted for a total score that they were unable to overtake. Their misfortune was compounded when they batted; many of their batsmen sent to the showers making poor shot selections. On the other hand, the NY boys let go of a sole possible catch. Their ground fielding was superb.  Their superior efforts, with bat, ball, and outfield performances deservedly earned them the victory over the tourists.

MCC won the coin toss and invited their opponents to take first knock. NY stepped on the accelerator, immediately. Randall Wilson and Abdul Syed kept the scorers busy. The first wicket fell on 63 when Syed (34) was caught short of his ground attempting a run. NY slid from 63 for to 81 for 3. Then USA players Alex Amsterdam joined Wilson, who was playing cautiously, watchfully, while his teammates came and went. The fourth wicket realized 54 runs, before Amsterdam (29) was caught on a mis-hook, taken at wide mid-on. Wilson reached his half century with a quick single to backward square-leg. Skipper Mohamed Ghous (27 N.O) and Wilson stepped up the batting tempo. Wilson was the seventh wicket to fall, bowled for 76 runs. The NY inning folded at 225 for 10 with 6.3 over remaining.

MCC started their inning disastrously losing their first wicket through the run out route and the score 4 runs. They continue to lose wickets at regular intervals. The batting star for MCC was R. Arthur. He scored 58 runs, which included 5 fours and 2 sixes. Double figure scores by S. Birtwisle (18), S. Naylor (14), P. Byrne (15) and C. Barrett (22 N.O) helped the MCC to 160 when the inning ended.

The fans who watched the game were mostly disappointed. They expected to see a more competitive game, considering that the touring team came from England. One fan, Basil Butcher, Jr., remarked to me,” Sam, this game is not exciting at all”. The attendance was low, considering that NY cricket fans are “crazy” about their cricket. Within the past month three tournaments were concluded and the average crowd size was in the hundreds. I am hoping that for the second game between the two teams, on Sunday, September 11, we would see a larger crowd.