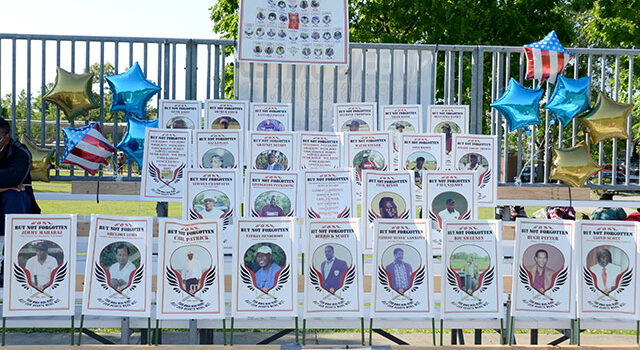 By Sham Ali
(Celebrating 43rd Anniversary) – We often tell stories of decades of selflessness and ultimate sacrifices of our fallen colleagues in the cricket community, and we do so in warm quiet tongues as the ‘golden years’ roll by. Memorial Day encompasses a lot of pride. This nation has dedicated the last weekend in May, Memorial Weekend, as a national holiday to honor the sacrifices of its fallen heroes. Though the act of remembrance can look different from place to place, we in the cricket community chose to honor our cricket colleagues whose memories live on in the hearts and minds of those who would follow in their footsteps.

The atmosphere at Idlewild Cricket ground last Sunday was filled with remarkable camaraderie among all of the cricketers who were in attendance and treasured by the many friends and family who deemed it absolutely necessary to pay their tributes. There could not have been a more appropriate occasion for our cricket community in our adopted home as we pay our tribute to the many who have dedicated themselves to a cause, albeit voluntarily, to kept the cricket torch alight long after they exited the world. “No person was ever honored for what he received. Honor has been the reward for what he gave.” Calvin Coolidge. And the occasion fittingly exemplified those words along with a healthy dose of love, respect, and humility. It was a somber celebration – two words that does not often accompany each other in the same sentence- however, you can count on our Caribbean people to uplift and add cheerfulness to a somber occasion.

The conditions were perfect for cricket, brilliant sunshine under clear blue skies, and the breeze felt like it was coming from the Caribbean blowing off the Atlantic Ocean or so we would like it to be in a land far far away from home. The day was simply glorious as if the Gods smiled on us, and one could have we felt the presence of our fallen colleagues in our company.

Cricket has a unique way of transforming the mind and body as it ignited a steady flow of adrenalin, and any niggles that were present before suddenly disappeared, and we become temporarily detached from the existence of all the worldly endeavors that had existed just a few minutes ago. Consequently, with so many other meaningful activities available to us, it is days like these that drives the cricketers and lovers of the game to the cricket ground to pay tributes to their fallen colleagues. It revealed the true value of friendship and the ability of the sport to unite and bring a community together. It drives home the notion that this is not just a game, but one that has played an integral part in the lives of the Caribbean people, and as such it must be enjoyed and protected. Two cherished qualities that were imbedded in the work of our fallen colleagues, and that is what brings so many on this day to remember and celebrate their lives.
All of those who left us were not just names or numbers among their peers, but friends, family, fathers, and championships in their own unique way, their character woven into the fabric of the cricket community. Some were dedicated to service and leadership, Clement ‘Busta’ Lawrence, Derrick Scott, Roy Sweeney, Hugh Pitter, Lloyd Scott, and Carl Patrick, others were driven by ambition, Jimmy Maharaj, Nizam Hafiz, Sheldon Gomes, and a majority demonstrate the grassroots values of respect and camaraderie, all with a common component, the love for cricket.

Words fall short to fill the void that has been left through years of friendship. Memories are often illuminated in recollection of the many accomplishments on and off the field, the thrills endured some won and those lost, and the postmortem that saturated the airwaves for the entire duration of winter served as an antidepressant to alleviate the winter blues.

Subsequently, these occasions may bring a small measure of comfort to the families who carry the pain daily and bear their burden silently not only at times of remembrance, but in endless quite moments that often stretched on and on in traits of their kin. But, hopefully, remembrance at this time will bring a smile, and some measure of closure and tranquility on this day in seeing the image of their loved ones in their many friends, just as they once were on the field together. Some sporting an oversized pant, a worn boots, an old dinged cap, a cherished willow, each piece with its own historical value, coupled with the exchanges of the many superstitions that once framed their character. They took pride in sporting their whites, wool, cotton or polyester, buckle or pull-string, button or none, and they did so with yesteryears pride in limited haves and needs, but with an undying sense of contentment and respect for the game; those sacred qualities of a generation with an incomparable culture of no proportional values. They were men with pure admiration of their heroes whose fame and framework were sculptured into their daily lives and often emulated on the cricket field, an admiration that comes alive in endless prose when enjoying an occasional smooth taste of a blended beverage.

The many tales told of missed opportunities, challenges endured and the appreciation of victories in small things, all designed to appease the mind. Some lived to a full life but always too soon, others shockingly too early, Rajendra Persaud and Nizam Hafiz, leaving us to question the Almighty; nonetheless, it is through HIS will that we are able to accept the inevitability of life’s frailty where none will play a role in choreographing their departure. For many, today will be just another day of sunshine and another cricket match for our colleagues who once shared these greens with us. For the families, the day their loved ones passed is a day that will be etched in their memories forever.

But they will not worry upon their death nor be unduly concerned about their body for their brothers will do the necessary. Their belongings will be disposed of keys, books, tools, shoes, and clothes and oh, those cherished cricket gears and trophies that only a few could have touched will become meaningless. The world would not mourn their passing, and the movement of the world will not stop because of their passing, and cricket will still be played. Neither status nor fame will help, how insignificant this world is compared to what lies beyond, those who really knew them will honor days like today, while others will remain sad for a few hours and then they will return to their discourses and entertainment after which they will be but a memory. Their story ended amongst people, but their real story just began, it’s the hereafter, and now begun the “real” life.

But we remember them, ALL OF THEM, in small, simple, thoughtful and meaningful ways. Come-if-you-care.

The cricket match brought out some of the stalwarts and many who once shared the same space; Hemant Gangapersaud (Fmr. TT national player / Sims), Colville Brown (Fmr. Windward Islands national Cricket and Football player), Sohan Dass (Fmr. Guyana national player/ Cosmos), Ganesh Ramsingh,Timal Singh, Besham Bahadur, Kawal Persaud, Sunil Narine, Lalta Persaud, Mohan Kissoon, young Alvin Gobin, graced the day and made their presence felt, while Neville Flowers and Shadi Khan had no arm left after their spell. In the finality, it was a fitting conclusion to one of the most impactful days of New York Cricket at Idlewild cricket ground.

The half time ceremony was officiated by yours truly. It encapsulated decades of dedication and hard-work of those we memorialize on the day, all 40 of them, and highlighted the value of their tireless hands that once moved cricket in this area. Nathan Henderson was ‘there’ as his ashes were sprinkled among the tapestry of greenery on the cricket field; a place where he once found the most comfort, and in his finality peace and tranquility. The occasion brought a smile and quiet appreciation on the faces of loved ones, and at times, it was poignant especially for one of my colleague, an administrative stalwarts of the Metropolitan Cricket League, Venelda Wallace, who spoke in glowing remembrance for her colleagues, many of whom she has had the opportunity to learn from and serve with over the years.

In his absence on this occasion, we cannot escape the powerful sentiments that were echoed last year by Dixeith Palmer, the former Jamaica national player and now a national sector, who had aptly captured real meaning of the occasion when he stated “It is a bitter sweet occasion for me. I looked at all the portraits of the guys who have passed a majority of them I knew personally. I know where they have gone, and we all will go there one day. I don’t know when or if I will see them, but today I am comforted in remembering them… I am humbled. This is an extra special occasion and a tremendous success.
“Shadi Khan in his kind words reiterated that “all these guys who passed away were my very good friends, and I am indebted to their memories, and that is why this occasion will be an annual event to pay tribute and honor their memory.”

Members of Cosmos Cricket Club turned out in numbers, like they always do, past and present, young and old. Young Alvin Gobin (12 yr old) warms the hearts of many, not only as a talented young cricketer, but as a new generation of cricketers who will keep the flame burning well into the future. Our very own opening batsman, Carl Bennett, now on the commentary microphone brought the essence of the occasion alive in his summation of the program and throughout the day; depicting in the truest form, the tireless work of every single one of our fallen colleagues.

It was indeed a solemn occasion. And for all that they represented during their time, not free from flaws and imperfections, a SON, a HUSBAND, a FATHER, a CRICKETER, a FRIEND, extra special in their own way. In their numbered days they still had enough of that element of tranquility and goodness for a world they have left behind; a noteworthy legacy that lives on through their multiple endeavors and in the many lives they have touched. And so, today like so many others, we hold their memories close to our hearts, but memories are often difficult to bear, however, we hope that the good ones often brighten the day. And on this day where memories of our beloved colleagues flowed like oceans, and their image dance in the eyes of their loved one, a celebration of their lives is but a small measure of our appreciation, and a quiet reminder that we must be tireless in our duty to those who have left us and bound to cherish those in our presence. A final farewell bid. So long boys.

Special thanks to Shad Khan for organizing this Memorial Match in collaboration with Cosmos Cricket Club. Cyrl Choy, Neville Flowers, Besham Bahadur, Jimmy Maharaj family especially his wife Asha, Rose (groundsman) DJ Ricky Kissoon, and the ever flamboyant commentator, Carl Bennett, who dotted the I’s and cross the t’s and gave the occasion its spark.