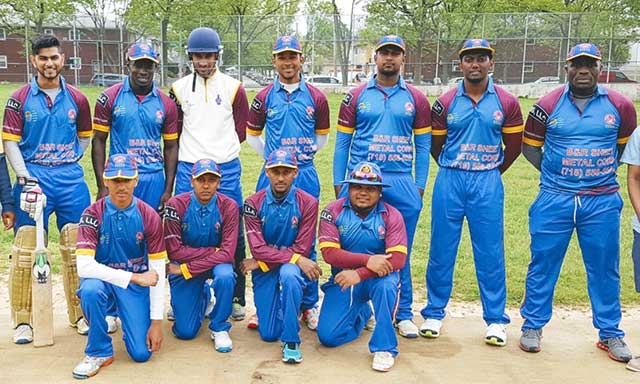 The Richmond Hill Liberty Cricket Club playing XI for the opening match of the 2017 EACA Season.

Leon Mohabir’s 4 wickets for 19 runs bowled Richmond Hill Liberty Cricket Club (RHLCC) to a 33 runs victory over Gladiators Cricket Club (GCC) to signal the start of a new era for the recently merged clubs. Naresh Rambharos’ unbeaten 42 along with Wahid Ward boundary filled 42 led the batting to 189 for 9 before Mohabir spearhead the defense for the win.

Richmond Hill Cricket Club going into its 27th year and Liberty Cricket Club into its 8th agreed, following the 2016 season to a merger. With the focus on promoting the game and their young members the team commenced the 2017 Eastern American Cricket Association (EACA) season at their home ground, the Baisley Cage.

In overcast conditions and following overnight rain GCC won the toss and asked skipper Trinson Carmichael to have his RHLCC boys take first strike. Following the early loss of Dominique Rikhi, Altaaf Habibulla and veteran Wahid Ward stabilized the top order. They added 59 inside 9 overs. The explosive Ward dominated the partnership with 42 runs consisting of 1 boundary and 6 maximums including three in succession in the 4th over of the match.

With scoring being difficult on a damp and lush outfield, RHLCC kept on losing batsmen after starts. Habibulla (20) and Trinson Carmichael (21) were the top contributors before Rambharos came to the wicket. 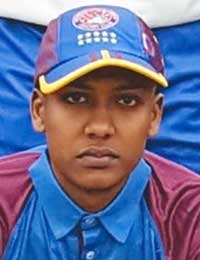 Leon Mohabir picked up 4 for 19 to lead the RHLCC bowling.

Involved in a poorly judged run, resulting in the fall of Inzy Khan, then losing two more partners Rambharos was left with last man in, Moien Khan and about 8 overs to go. The young pair negotiated the closing overs with the smarts of a veteran duo. With the hard hitting Rambharos taking the lead and Moien diligently fending off the opposition they added a valuable 34 runs, unbeaten 10th wicket partnership. Rambharos finished with 42 not out which included a six and 2 fours while Moien finished unbeaten on 2.

At the end of the allotted 40 overs RHLCC posted 189 for 9. Bowling for GCC, K. Adams, K. Seepersaud and K. Shaw picked up two wickets each while R. Nurse and M. Seepersaud bagged one each.

RHLCC’s Jamiel Jackman drew first blood in the 3rd over trapping opener A. Ragdnath infornt of the stumps for 2. S. Shaw and M. Seepersaud moved things along with their 2nd wicket partnership, however. The pair added 71 runs setting GCC well on course to track down the 190 needed. Former GCC member, Hibibulla picked off M. Seeperaud as he was looking to press on with his inning.  Joel Boodhoo then picked up two quick wickets to remove top scorer Shah for 40 and then D. Umadath for 3.

With the pressure building and the required run rate climbing the 2016 EACA leading wicket taker, Leon Mohabir was introduced into the attack. The dimunitive mystry man picked up right where he left off in 2016 with a wicket off his very first ball of the match bowling K. Seepersaud.

Mohabir continued to weave a web around the remaining GCC batsmen picking up 3 more of the reamining five wickets to finish his spell of 8 overs 4 wickets for 19 runs. Inzy Khan picked up one wicket off a sharp peice of work from his 14 year old brother Moin Khan. Skipper Carmichael sealed the deal by having last man in, K. Adams, stumped for 1 to wrap up the 33 runs victory.