By Kerk Higgins
On a day that we expected to wake up to thunderstorms and possible flooding, we woke up to lots of sunshine. With great weather, the stage was set for the usual Father’s Day rivalry between defending champions Big Apple (BA) and Richmond Hill (RH). Big Apple players started arriving at the Cage about 11:30am. Upon inspecting the playing surface, officials noticed that it was a bit soft from some overnight showers. The players decided to give the wicket a light roll for about 15 minutes, then let the sun dry it out for another 15 minutes before putting the matting down. 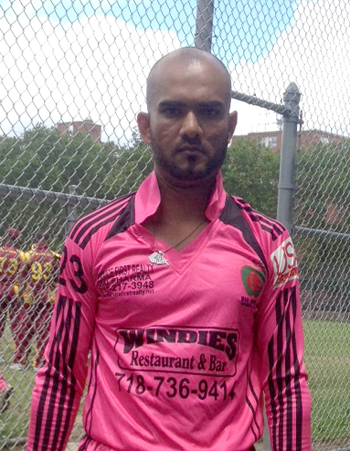 By this time the umpires and the RH team had arrived and they were ready to get the ball rolling. At about 12:45pm the two captains spun the toss. Derick McDonald replaced Shameer ‘Joey’ Sadloo as the captain of RH because Sadloo is out with a foot injury. McDonald decided to give the defending champs first knock on the soft track. It was now 1:10pm and umpires Steve Kalloo and Leonard Jackpersaud walked out onto the field; the RH men clad in maroon and yellow followed them closely.

When the umpire called play it was Sean Stanislaus with ball in hand and Donwell Hector taking first strike, with Deonauth Baksh at the non-strikers end. The batting pair was very quiet against Stanislaus but they took a liking to his opening partner: McDonald. The captain’s first two overs cost 24 runs with Baksh hitting two sixes and Hector two fours. The two batters continued to progress aggressively until BA lost Hector in the 20th over with the score on 128, for a well-played 74 (7×4’s, 3×6’s) off 69 balls. Hector was well caught by Sean Thompson at midwicket off the bowling of Nigel Bridgelall who was bowling a decent medium pace.

Next to the wicket for BA was the young and talented Dominique Rikhi, who was coming off a well-played half century against Liberty. By now Baksh was going all guns; he had just passed his second half-century of the season. RH had already tried a half dozen bowlers and nothing seemed to be working in their favor. The Apples were on course for at least 350 runs, but Wahid Ward had other plans. Ward came back into the attack at the Foch Blvd end and removed Rikhi for 33 (2×4’s, 1×6) off 26 balls; he was well caught by Stanislaus who took three catches on the day.

In came BA captain and arguably one of the best batsmen in the New York Region, Zaheer Saffie. The score was 197/2 after 30 overs and Baksh was still looking very comfortable on 86 and in search of his first century of the year, until Ward struck for the second time in two overs as Baksh was caught at deep mid-wicket for a very well-played 88 (4×4’s, 3×6’s). Kumar Nandalall was reintroduced to the attack and immediately rolled back the years with some excellent bowling that troubled Saffie. He had Saffie beaten for four consecutive balls before bowling him out with the fifth delivery. This was when the RH bowlers took control and BA middle-order began to collapse. BA went from 222/4 to 288/9 from their allotted 40 overs. 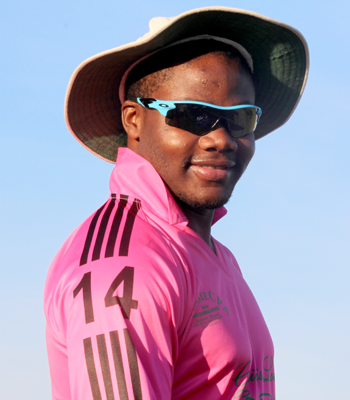 After being refreshed with some Gatorade and Curry Goat with white Rice, the men in pink (BA) took the field and were ready for battle; they were followed closely by the two RH opening batsmen Marlon Kallicharran and Pradip Roopchand.

BA started their defense with medium pacer Telston Johnson from the Foch Blvd end. Needing to score at 7.2 runs per over, RH got off to a good start with 10 runs off the first over; in the second over of the inning, Mark “Chucky” Gomes struck for the defending champions when he had Roopchand caught at the wicket by Hector with the score on 10 and Roopchand on 1. In came the veteran Debo “Sachin” Sankar, but he didn’t last too long as he tried to play an aggressive shot off Johnson and was caught by former West Indies fast bowler Adam Sanford at mid-on. Although RH was in a bit of trouble at 26/2 after six overs, Kallicharran was looking very attacking with shots landing all over the Cage.

At the first drinks break RH was 97/2 going at 6.2 runs per over with Kallicharran and Stanislaus looking very positive against the bowling. Unfortunately for RH, they lost Kallicharran immediately after the break, but not before he roughed up Sanford with some aggressive hitting; he made 74 (10×4’s, 1×6) off 49 balls. The score was 120 when RH lost their 4th wicket—this time it was Stanislaus who fell trying to get back some of the 81 runs that he gave away off his eight overs.  He was caught at mid-wicket off the bowling of Shiv Raghubar. RH needed to try and up their run rate because it was very cloudy and the rain was threatening to stop play; so in came McDonald to join the hard-hitting Ward who was on 12, with one six and one four to his name.

After hitting one more six, Ward was on his way back to the dugout caught off the bowling of Rikhi. RH would lose two more wickets before the rain came and ended play at approximately 6:35pm.  At the close of play RH was 155/7 off 26.3 overs and the umpires declared BA the winner by 40 runs.

Apart from Kallicharran, no other RH batters threatened the BA total; they were two wickets apiece for Saffie and Rikhi, and 1 each for Johnson, Gomes and Raghubar. RH wickets fell at 10, 21, 101, 120, 128, 144 and 154. With this victory BA moved to 5-1, and RH is now 3-3. The men in maroon will be looking for revenge when these two teams meet again in round two later in the season.

The EACA CricketZone 40 overs continues next week with RH hosting East Side Warriors and BA traveling to Atlantis for a repeat of last year’s finals.