Three games were affected by rain, two of them abandoned without a ball being bowled, but the one that did manage to avoid the rain – even if not entirely – was lit up by Rizwan Cheema, who hit 98 from 36 balls to hand Canada a 74-run win over Namibia during the second round of warm-up matches on Tuesday (July 7) ahead of the ICC World Twenty20 Qualifier 2015. 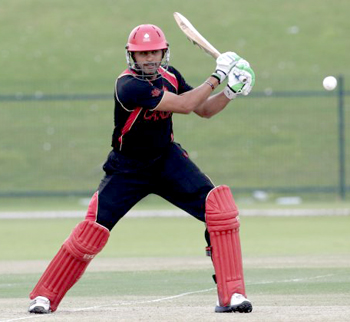 Canada, opting to bat after winning the toss, got off to a flier courtesy Cheema as he guided the side to 68 for 1 from the first five overs after rain had reduced the game to a 13-overs-a-side affair.

Cheema showed no signs of relenting as Canada crossed the 100-mark in just ten overs. Tiaan Snyman finally felled Cheema in the 11th over but Canada had parked itself in the driver’s seat by posting 149 runs, losing just three wickets.

Namibia’s batsmen appeared too fragile to test the well-oiled Canadian bowling unit. Saad Bin Zafar was the pick of the bowlers for Canada. He scalped four wickets for 16 runs from three overs, while Cecil Pervez and Satsimranjit Dhindsa bagged a couple each to help Canada bowl Namibia out for just 75 in 11.4 overs. Only two batsmen – Gerrie Snyman and Sarel Burger – were able to make it to double digits in the run chase.

Over at Stormont in Belfast, Alex Cusack and George Dockrell picked up three wickets apiece to help Ireland bowl Oman out for just 91 in 18.5 overs. But before Ireland could come out and have a crack at the chase, the rain came down and the game had to be called off.

Elsewhere, Kenya’s clash against the United States of America at Bready and Afghanistan’s tie against Hong Kong in New Williamfield were both washed out.