By Ravi Madholall in Toronto
The inaugural Global T20 Canada climaxed on Sunday at the Maple Leaf King City ground with Vancouver Knights beating West Indies ‘B’ by a captivating seven-wicket margin with 15 balls to spare.

West Indies ‘B’ were sent into bat on a decent pitch and only tallied up a moderate 145 all out in 17.4 overs while Vancouver Knights replied with 148-3 in the 18th over.

Their victory was orchestrated by a responsible, unbeaten 79 from Canada player Saad Bin Zafar while the left-hander also collaborated with South African He Van der Dussen (44*) to score an impressive unbroken 126-run fifth-wicket stand.

The pair joined forces after their team was in a precarious position at 22-3 in the third over losing the huge wicket of skipper and pugnacious opener Chris Gayle for two and his opening partner Chadwick Walton for four.

The West Indies ‘B’ came into the six-team tournament as ‘Underdogs’ but played superbly to win four matches in succession and then featured in the championship contest.

Their fielding was excellent and the level of enthusiasm was great having Vancouver Knights in serious trouble.

However, Zafar batted purposefully while Dussen showed good application as well. They brought up the fifty in 7th over and continued to rotate the strike admirably in front of a 7,000-capacity crowd. 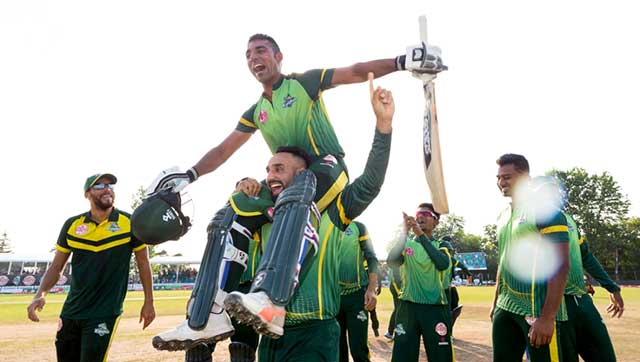 Saad Bin Zafar is hoisted off the field after guiding Vancouver Knights to title win in the Global T20 Canada. Photos courtesy of http://www.gt20.ca/

Zafar hit eight fours and three sixes during his 48-ball stay at the crease while Dussen reached the boundary on three occasions. Green finished with the best figure of 2-21 from three overs.

When West Indies ‘B’ started their innings, they lost Justin Greaves (16) and the other opener Shamar Springer (10) in quick time while Brandon King (03) and Sherfane Rutherford went back cheaply too. Rutherford, who hit a scintillating 134 not out in the first Qualifier match against the same opponents, failed to reproduce that innings as he was taken for 14.

Nicolas Pooran (08) , one their key batsmen, perished early to leave his team tottering at 53-5 until Fabian Allen arrived in a belligerent mood striking a cameo 23-ball 41 laced with three fours and similar number of fours to give the score some amount of respectability in glorious sunshine.

At the presentation ceremony that took place just after the completion of the 18-day tournament, the victorious side pocketed US500, 000 and a silver-made trophy while West Indies carted off US$250, 000.

“This was surreal. It was a bit intimidating to play under Gayle because I’m a big fan and 10 years ago I took a picture with him,” said Zafar. “But he’s been a supportive captain. He trusted me and gave me responsibility and I’m glad to make a contribution today (Sunday) in this final,” Zafar related.

Gayle also spoke about his team’s triumph stating that the side was very cohesive from the commencement of the tournament and delighted to lift the first trophy.

“Saad’s job was to consolidate the innings for us, but he actually brought it home,” said Gayle. “Everyone played a role for us in this tournament and I’m very happy with Saad’s performance in the final,” the Jamaican mentioned at the post-match press conference.