Jamaica Tallawahs star batsman Kumar Sangakkara has nothing but positive memories from his previous stint in the Hero Caribbean Premier League (CPL), but the Sri Lanka superstar is keen to create a new legacy when he links up with the Tallawahs squad for the fourth installment of CPL. 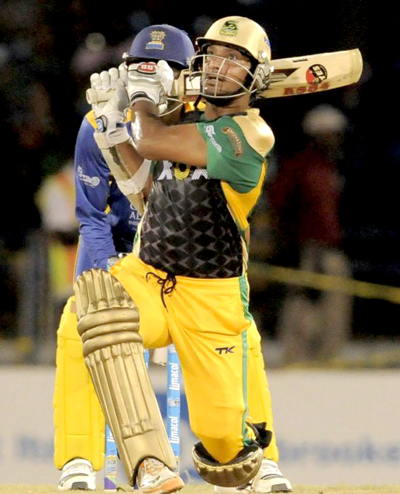 A legend of the modern game, Sangakkara is one of the most fluent batsmen in recent history across all three formats. An ICC World T20 champion in 2014, where his 52 not out earned him the man of the match award in the final victory over India, the left-handed wicket-keeper batsman scored more than 28,016 international runs at an average of 57.40 (in 134 Tests), 41.98 (in 404 ODI’s) and 31.40 (in 56 T20I’s). He has also claimed 609 catches and a further 139 stumpings in international cricket.

The Tallawahs will start their CPL campaign with an away clash against St. Kitts & Nevis Patriots on Saturday, 2 July and Sangakkara knows that this will be one of the most competitive campaigns to date on all fronts as Chris Gayle’s men bid to wrestle the title back to Jamaican shores.

In an exclusive interview with www.cplt20.com, which is available for free download and editorial use, the Sri Lanka legend reflected on the 2013 campaign, why playing in the CPL is special, on why the CPL’s decision to play matches in USA is a “great thing” and his excitement about returning to the Tallawahs after a three-year hiatus.

On his memories from the 2013 CPL-winning campaign: “I remember going into the Tallawahs knowing that it was a great team with Chris Gayle, Andre Russell and (Chadwick) Walton all in there. We had some great overseas player in Murali (Muttiah Muralidaran) and a few others. And just going to the semis and the finals, and the business end of the tournament. So there’s no pressure on me to go out there and perform! I just remember getting to Trinidad, where the matches were, and just absorbing the atmosphere. It was exactly what you’d expect of a T20 tournament in the West Indies. It was just, you know, a lot of passionate followers, a lot of people having fun and West Indies followers know a lot about cricket. They know their cricket very, very well. And it was just the most exciting atmosphere to play in. It helped that we won the semis and the final. Paul Nixon was coach at that time and it was a great dressing-room, a lot of fun, relaxed cricket but a lot of good cricket. So I’m really looking forward to going back.”

On his decision to return to the CPL: “It’s not really a question of you making a decision of going into CPL. You put your name into the auction and you wait to see whether they’re actually interested in you and getting you over there. There were a lot of different reasons, starting from the fact that the Leagues around the world are quite lucrative. Then of course you have the fact that it’s T20 cricket and everyone loves playing T20 cricket. The fact that when you are a cricketer and you continuously compete, playing in these leagues gives you a lot of exposure, a lot of experience and you also play with a lot of different players in a lot of different set-ups. It also helps you grow as a cricketer and as a person. And the other point is that it’s the West Indies. It’s the Caribbean. It’s calypso cricket and the initial year of any tournament, in a franchise format, is a difficult one. And I think that the West Indies now, over the last three or four years, has built a fantastic brand in the CPL. And to have been involved in the initial stages is great. So there’s always a variety of reasons that you go and play and, for me, it was a mixture of all those reasons. I know the players quite well. Most of the West Indies guys I’ve played with are very easy to get on with. They’re fantastic natural cricketers in their own right, but also very good people. So it was always a ‘win-win’ coming to play in the CPL.”

On the rise of West Indies cricket in recent months: “The West Indies won the ICC World T20 in 2012. We played them in the finals and lost. Then to come back, having gone through some very troubled times, and to lift themselves in that unbelievable final. I was in Sky studios actually doing some work for the finals, and to get to that last over with 19 required. You know, we were all seated around the TV and having a chat about what was about to happen. My comment was, ‘…if that first ball goes for six, it could be an interesting over!’. You know, you can’t write a script for an ending like that. So, on the back of that, to get into the CPL with a lot of hype from the public from the support they have given the players and how it has been repaid with the World Cup, I think it will be another fantastic edition of the CPL.”

On returning to play with the Jamaica Tallawahs: “I’ve very happy to be back at the Tallawahs. I have some great memories, like I said, and one of them was Gerard Butler turning up in the dressing-room, getting a helmet and a pair of gloves on and swinging a bat, having a chat and a laugh with us. That was exciting! It was a bit surreal to see him in a cricket dressing-room rather than on screen. But the entire mixture of that whole glitz and glamour of T20 cricket – when you have a tournament like that, the vindication of all that effort is the quality of cricket on the field. And I think that’s what really stood out at the end of that entire tournament. Everyone had fun, everyone had a lot of non-cricketing stars that came along to watch the cricket, who had a love for the game. And there was a lot of passion from the followers. But the stand-out was the cricket. In any tournament, if the cricket you put on the field is the best you can display, it goes a long way in establishing the tournament as a marquee event.”

On the makeup of the Tallawahs squad: “I think the rest of the squad is very good. You have the ‘Universe Boss’ (Chris Gayle) playing for us so that helps! Andre Russell has been an amazing player in the shortest versions of the game. He’s an unbelievable athlete and I remember in that semi-finals and final, when I did play, he was the defining player of the tournament. He won us those two games, along with Chris in the finals, so you have a great core. You have Chadwick Walton, Shakib Al Hasan and you have Alex Ross from Adelaide coming in and Imad Wasim from Pakistan. So, the squad of local and foreign players is a nice mixture. But in any tournament, the real difference in the squad is made by the majority players who are the local players. So from our left-arm spinners to our all-rounders, to the fast bowlers and to the great West Indians like Chris and Andre, it’s going to be a very good collective effort if you’re going to get to the final and maybe win again. That’s the ambition and I’m sure everyone will have a great time trying to get there.”

On the Chris Gayle / Dale Steyn factor: “I actually think there are two players who will get plenty of attention. One is ‘Bullet’ Dale Steyn. The other is Chris Gayle. And with his book out I think it will be a great stage for Chris to really express himself, not just as a person and I don’t think he’s shy in doing that, but also as a cricketer. And I think Chris is a fantastic ambassador for the game, through the way he plays the game. Sometimes his character is something you have to get used to at times, but having played with Chris over the years I just think that he is who he is. And the way he plays his cricket is very honest. He expresses himself fully and it’s a great joy to watch him on that field. He has a lot of fun playing the game, he’s funny, he’s humorous so it’s wonderful. And Dale Steyn is slightly different to Chris. (He has) An amazing cricketing ability and those abilities between the two of them are very similar, but a lot more quiet. He’s not larger than life, like Chris, but he’s just one of the nicest men I have ever met. Forget cricket, Dale Steyn would be one of my favorite people because he’s just a wonderful human being. I’ve had the privilege of knowing a lot of people, but Dale is a very special person.”

On the CPL’s decision to play fixtures in Lauderhill, Florida in this CPL: “I think it’s great. On the back of what’s happened in the last year and a half in the promotion of cricket in the United States, there’s a great opportunity to actually hammer that point through. I think the message should be a constant one to America as to what cricket is. There’s a huge ex-pat community in America who already knows about the sport that came to watch the (Sachin) Tendulkar and (Shane) Warne series that we played last year. I played in Florida before in 2010 against New Zealand. But just to get more and more people come and watch, to understand the sport and actually try to foster some kind of following and love for cricket will probably afford us the opportunity to break into America and really help cricket establish its strong roots there to be embraced by the general population. Let’s hope that this is another step in that direction.”

On the pressure on Jamaica to perform for a demanding fan-base: “The pressure to perform is the same. It doesn’t matter what label that you have, whether you are the favorites or the underdog, if you don’t perform the results don’t come. And to absorb that pressure is what you really get paid for. So everyone will understand that, will accept it and all they’ll try and do is have a lot of fun expressing themselves on that cricket field because if you get caught up too much on the fact that you have to deliver results, you forget to actually go through the processes of doing a good job; which is to play your best cricket, have a lot of fun doing it, support each other as a team and then, win or lose, to go out there and smile and walk on and off (the field) with your head held high. I don’t expect it to be any different. The pressure won’t be less, the pressure won’t be more.”

*Tickets for all CPL fixtures in the Caribbean and Fort Lauderdale are on sale now from www.cplt20.com.