ACF Volunteer Of The Year

Meet 30 year-old Satish Hanumanthu, a Tampa Bay, Florida resident by way of Vishakhapatnam, India.  Tampa Bay is a long way from where the electrical engineering graduate once called home, to where he is now and his involvement in the sport of cricket. A spin bowler who sees himself more in the role of cricket administrator, Satish readily admits his strengths are more in the administrative side of cricket. 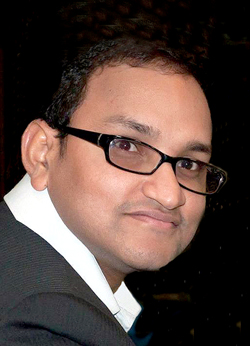 Satish Hanumanthu finds himself more on the administrative side of cricket than playing.

Thus, it was no surprise when ACF received a nomination on his behalf, for an ACF Volunteer Recognition Award.

The University of South Florida (USF) electrical engineer graduate came to the USA in 2007 to pursue a Master’s degree and immediately became one of the founding fathers of the university’s cricket club, which has grown exponentially.  Satish has served as president of the University Cricket club for several years.

Satish’s contribution to the growth and development of cricket in the USA did not stop with the birth of the USF Cricket XI; he helped organize the Students of India Association (SIA) hard tennis ball tournaments featuring 16 teams, which raises money for SIA projects.

In addition to his SIA fundraising efforts, he started a Students Premier League, the first tape ball league of its kind to have auctions broadcasted via Ustream.

The volunteer efforts of Satish has not been limited to men’s cricket, he has successfully organized a three-team women’s tape ball cricket tournament and has been instrumental in promoting cricket in the Tampa Bay area of Florida.  ACF is pleased to adjudge Satish Hanumanthu as its 2014-2015 National Volunteer Recognition Award recipient for his ongoing contributions to the growth and development of cricket in the USA.

For more information on the ACF Volunteer Recognition Award program and how to nominate your favorite volunteer visit www.americancricketfederation.us