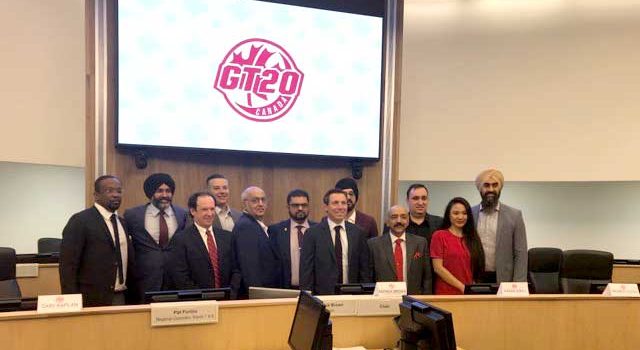 Second Edition Of Global T20 Canada To Start On July 25

By Ravi Madholall in Brampton
The second edition of the Global T20 is set to get cracking from July 25 to August 11 at two unnamed venues in the City of Brampton.

This declaration was made on Tuesday in the Council Chambers at Brampton City Hall as six Franchises would be battling it out for US$500, 000.

Toronto Nationals, Montreal Tigers, Edmonton Royals, Winnipeg Hawks and Vancouver Knights are the teams confirmed to participate while a sixth Franchise side will be disclosed soon, according to Tournament’s Director Jason Harper.

At the inaugural tournament in 2018, West Indies B team featured and were the finalists but Harper stated that they would not be part of the actions on this occasion as they will be having another Canadian City competing.

Harper, who also performed in the same capacity last year, mentioned there will be a significant increase in the number of marquee players from 10 to 18 for this year’s showpiece.

“We [are] definitely delighted and excited to have another Global T20; we also wish to announce the tournament will now be played in the City of Brampton, and last year Global T20 brought a new sports property to Canada” Harper related.

All 2018 matches were played at Maple Leaf King City facility and the major reason to have the star players in Brampton is due to have a greater spectator’s attendance.

“In 2018, the final was great; the same day it was the FIFA World Cup final but we had a full turn out and we are hoping to run off another successful tournament; Brampton is a wonderful City and we feel it is not too far away from home,” the Canadian-based Harper informed.

In the championship contest, Vancouver Knights Riders surged to a commanding seven-wicket win over West Indies B. They were led by Canada player Saad Bin Zafar, who fashioned an unbeaten 79. The victorious team was captained by West Indies pugnacious opening batsman Chris Gayle and Harper is already promising cricket enthusiasts that the hard-hitting left-hander Gayle will be back along with a large number of international T20 high-profile cricketers.

Meanwhile, Mayor of Brampton, Patrick Brown, in his remarks, said Brampton would certainly be buzzing at the announcement of this phenomenal news that all Global T20 fixtures are here.

“I am thrilled and happy to hear the Global T20 will be playing in our City (Brampton); I can assure the people behind the Global T20 that Brampton is ready to make this a great success because cricket has grown tremendously; recently I looked at IPL final and there was great excitement to watch a T20 huge cricket final,” Brown declared.

Adding his voice too at the Conference was President of the Cricket Canada Ranjit Saini, “Canada cannot wait for the action to begin. We at Cricket Canada are committed to providing much-needed opportunity and exposure to our Canadian players. We will work alongside the GT20 team to make the 2019 edition even more memorable for the players and fans. On behalf of Cricket Canada, I invite the cricket world to Canada.”

CEO of Global T20 Karan Singh also spoke gleefully of having the tournament being played in Brampton.

Fans from across the global would have seen the familiar star-studded players last year like Gayle, Andrew Russell, Sunil Narine, David Warner, Lasith Malinga, Steve Smith, Kieron Pollard, Dwayne Bravo, David Miller, Nicolas Pooran, Tim Southee, Shahid Afridi among others. Harper is assuring fans that these and more big-named cricketers will be in North America for the Global T20 again.