Sharaz Baksh turned in another solid all-round performance to end Guyana’s three-game losing streak. After picking up 2 for 28 and taking a couple of superman-like catches, he then returned to stroke an impressive half-century to see his team home. 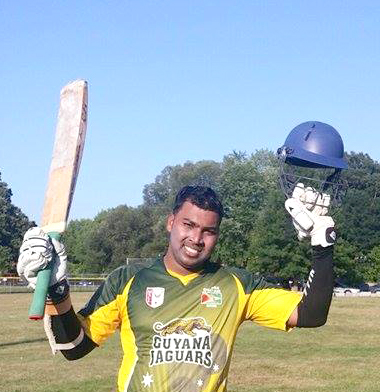 Sharaz Baksh half century and 2 for 28 helped Guyana Jaguars secure a win.

Baksh getting the prized wicket of Anil Kumar (5) who had already scored a couple of centuries this season. Raghunandan Sridhar (35) and Hemant Kaligotla (32) put on a 60-run partnership for the 5th wicket. Good death overs batting by Rahul Chelikani (30), none the less saw Eagles CC being restricted to 154 for 9 in 40 overs. Lall Balgobin and Rudy Jaglall picked up two wickets each, with one apiece for Bruce, Ramlochan, Mahabir Balgobin and Baksh.

In Reply Guyana also got off to a disastrous start at 28 for 3 in 8 overs. However, Sharaz Baksh (65) took command of the inning by playing a captain’s knock. As always, Baksh was fluent and seemed to be batting on a different wicket from everyone else. He was well-supported by Oditnarine Ramlochan (43*).

The pair put on a match-winning 4th wicket partnership, with Ramlochan playing the anchor and supporting role, but then came into his own with a couple of sweetly time pulled shots that went for sixes.  Baksh was dismissed when the scores were leveled attempting to run a ball down to third man and nicked it to the keeper.

Baksh’s timely heroics was no doubt very welcomed, in putting an end to Guyana’s losing streak.