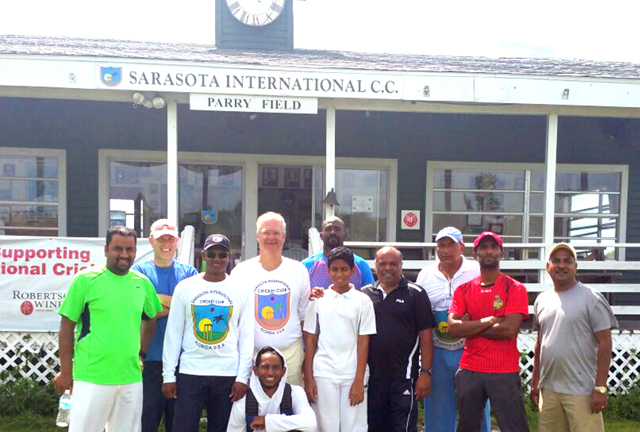 Interest is high in Youth and Women’s cricket in the State of Florida, as well as in after school cricket programs there, however the development is being hampered by the lack of certified cricket coaches. Encouraging and expanding the number of coaches is a vital part of SICC’s mission to promote cricket in Florida and the USA.

The SICC club owns two side-by-side cricket fields, which can be used for youth and women’s cricket.  The recent coaching clinics were conducted by ACF’s Director of Coaching Jatin Patel, and produced 10 new Level 2 coaches and six new Level 1 coaches; it is a first step towards providing an adequate number of trained coaches to help develop the potential of the youth and women cricketers in the Sarasota area.

Founded in 1983 by a diverse group of SICC cricketers who brought their knowledge and love of the game to the west coast of Florida, with the aim of giving people there the opportunity to learn, play and enjoy the world’s second most popular sport.  The club’s activities are geared to achieving its formal mission: To promote the sport of cricket by conducting games and tournaments for amateur cricketers nationally and internationally, and to support the development of amateur cricketers, particularly youth cricketers for those competitions, by providing facilities, equipment and training.

SICC is a not-for-profit, tax-exempt organization under section 501(c) (3) of the revenue code, and the club is the only one in the USA organized solely for the purpose of promoting and playing cricket, that has its own facilities. Its Bermuda grass playing field, ICC¬ approved non¬-turf match wicket, practice net and clubhouse, are recognized as being among the finest facilities in the country.

SICC activities include a year-round schedule of games in Sarasota with teams from across Florida; occasional games with teams from up and down the east coast; the hosting of touring teams from other countries; the staging of an annual cricket tournament since 1997 that has drawn entries from Canada, the United Kingdom, Mexico, Bermuda, the Cayman Islands, Australia, Israel and Holland, as well from all over the United States; sponsorship of a local youth cricket program; tours that have taken Sarasota cricket to England (twice), Scotland (as ambassadors for Sarasota to its Twin-city of Dumfermline), South Africa, the Bahamas, Canada (four times), California, Guyana, Trinidad and the Philadelphia International Cricket Festival (six times).  Milestones for the club include the visit of the Lord’s Taverners, England’s primary cricket charity benefiting physically challenged children, in 1995: matches against the cricket team of Her Majesty’s Yacht Britannia in Sarasota and in the UK in 1997; the visit of the Primary Club, Australia’s principal cricket charity in 2003; and two matches with the MCC touring team from London as part of their cricket development tour of the eastern USA organized by the International Cricket Council and the England and Wales Cricket Board, respectively, the world and UK governing bodies for cricket.

The following testimonials are indicative of the success of the ACF clinic hosted by SICC:
“Thank you coach – Jatin Patel, It was a wonderful experience to attend the ACF Level 2 Sarasota Cricket Coaching clinic. Everything was perfectly organized; Chris Thakoorpersad did a marvelous job to make me feel at home. Thank you Chris. My perspective has changed as far as teaching the game of cricket to youths. Now onwards I will be more organized and simple in my approach with younger kids so they can develop as better players. Coaching instructions were simply practical rather than coming out of books. Thanks a lot for your effort to teach us how to become perfect coaches.”  Sandip J. Desai

“I really enjoyed the sessions and thanks to Jatin Patel and ACF for making the classes fun and engaging. Needless to say it was an honor to meet Shivnarine Chanderpaul and to listen to him share his experience and cricket knowledge. Thanks to Chris Thakoorpersad for making this happen, and I for one look forward to any other classes that come up in the future and to be a part of the SICC club in the future.” Ganeshbabu Venkat.

As of August 20, 2016 there were a total of 266 Level 1 and 85 Level 2 certified coaches helping the sport grow in the USA, including 174 Physical Education teachers who have added cricket coaching expertise to their coaching certification portfolios in schools across the country.