Smart Choice USA will announce its squad on April 10 to compete against Canada National Team in a three series T20 games to be held in Houston at the Moosa Stadium between April 28-May 1. 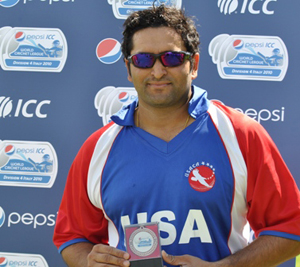 Sushil Nadkarni poses with one of his many International Cricket Council MVP awards. Photo courtesy of ICC.

Sushil Nadkarni poses with one of his many International Cricket Council MVP awards. Photo courtesy of ICC.

The trophy is being named after former USA and India Under 19 player and proud resident of Houston, Sushil Nadkarni. Who announced his retirement last December at the age of 38 and is considered as one of the most prolific batsman in the history of USA cricket.

Nadkarni finishes second on the overall runs list for USA both in T20 and 50-over cricket with 439 runs at 24.39 and 1796 at 51.31 respectively. The next best average for USA’s top ten scorers in 50-over cricket is former West Indies Test batsman and USA captain Faoud Bacchus, who averaged 38.00 during his time playing for USA.

Nadkarni spent several years as vice-captain under Steve Massiah but got to lead the national team in his absence during the 2012 World T20 Qualifier, which was held in UAE.