By Sam Sooppersaud
It could be said that Sunday, September 11, 2016, was Finals Day for at least two cricket leagues in New York City; the Eastern American Cricket Association (EACA) and the New York Metropolitan Cricket League (MCL). Both finals were played in Queens – The EACA at the Cage and the MCL at Idlewild Park. 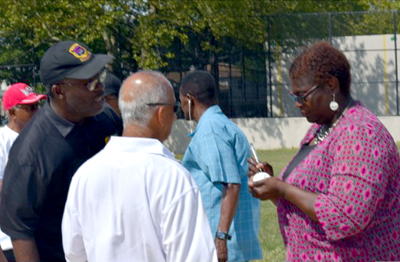 It was a day when champions were crowned, the culmination of hard work and sacrifices by cricket clubs. For the winners and the losers, it was a day of celebration. Celebrating the fact that they had triumphed over numerous opponents to reach the finals. An exciting day for the cricket fans who have supported their favorite clubs throughout the 2016 cricket season.

However, this was also a very solemn day for people throughout the USA. This was the day when terrorists carried out attacks at various locations in our country. In Shanksville, Pennsylvania, where spirited and brave citizens retaliated against the terrorists on an airline, thus preventing a worse disaster. At the Pentagon in Washington. D.C., and in New York city where terrorists used two hijacked commercial aircraft to demolish New York City’s Twin Towers, The World Trade Center. Thousands of innocent citizens lost their lives at the three locations.

In Queens, at the Foch Boulevard Cricket Field, where the EACA finals was played, we had a distinguished visitor: New York State Senator Roxanne Persaud, of the 19th Senatorial District in Brooklyn, N.Y.  Her district covers parts of Sheepshead Bay, Mill Basin, Bergen Beach, Canarsie, and East New York. Prior to the start of the game, she joined the players, Umpires, league officials and fans, in a memorial ceremony conducted by the Rev. Deacon Sam Sooppersaud. A minute of silence was observed followed by a prayer asking God to rid the world of hate and violence. It was our prayer that those killed be at rest in peace, and that our benevolent God give comfort to the bereaved families. The gathering asked for recovery from illness for all who still suffer from the effects of the attacks, 15 years later. 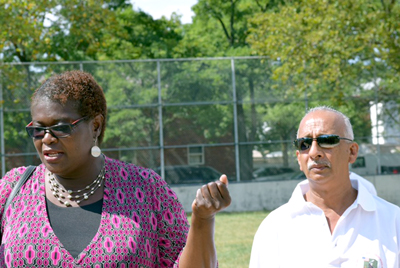 In her short remarks Ms. Persaud, who hails from Guyana, pointed out that it was a significant day for Guyana, historically, as it was a day when the largest number of Guyanese were killed in a single day. Not a record to be proud of, but one of sadness. It was a day which most of us would rather forget, but we observe it, in honor of those fallen heroes, by memorializing them. Two of those individuals were close to the cricketing community in Queens – Shevonne Mentis, the daughter of an avid cricket supporter Aubrey Mentis, and Nizam Hefeez, a cricketer, who at the time of his death represented Everest/ACS Cricket Club in the EACA, and was the vice-captain of the USA national cricket squad.

Prior to the start of the game, State Senator Persaud was invited by Mr. Rudy Persaud, President of the EACA, to bowl the first ball (equivalent to throwing the first pitch in a baseball game). It was an off-break which the batter negotiated with a bit of difficulty. The Senator and those gathered had a big laugh. Ms. Persaud had a tight schedule for that Sunday and ahead of her re-election bid for the Senate the next day. She has held the seat since the departure of Senator John Sampson. However, she still found the time to stay and watch about an hour of the game.

Later in the day, State Senator James Sanders, also in a re-election campaign showed up at the park. He moved about the crowd shaking hands and chit chatting on various matters. Over the years the cricket fraternity and politicians have enjoyed a close mutual relationship.  Because of this interaction several parks have been designated for cricket. To name a few: Baisley Pond Park and Idlewild Cricket Complex in Queens, five new facilities at Van Cortland Park in The Bronx, and several other cricket parks in Brooklyn.

In fact, the Spring Creek Cricket Park, the first park to be allocated and designated solely for cricket, was recently renamed the Roy Sweeney Cricket Oval. Sweeney, who passed away in 2013, was an ardent cricket lover who dedicated decades of his life to securing proper cricket facilities in the New York metropolitan area.

It is hoped that one day, in the near future, that cricket would become a mainstream American sport and more attention would be given to the sport and the improvement of facilities by our elected officials.