The USA Men’s National Team will tour Abu Dhabi and Oman later this month to play a series of matches against a number of top performing Associates in world cricket. 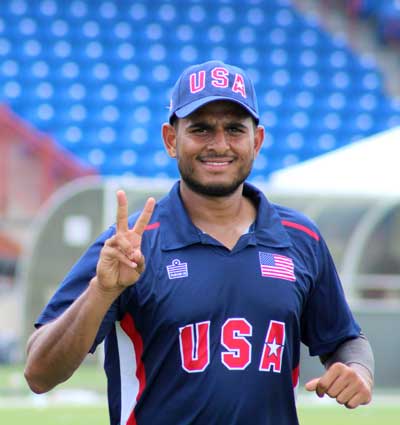 Adil Bhatti is one of the player added to the team. Photo by Jayden Higgins

This tour will allow us to continue to build on the team’s momentum from the recent Auty Cup win over Canada – the first time in 26 years – and experience different playing conditions and world class facilities.

The Selection Committee have only made two changes to the winning Auty Cup team, one based on availability, the other an inclusion to bring the squad to 15.

Chairman of Selectors, Ricardo Powell said: “We decided to keep the team largely unchanged due to the recent success, both on and off the field, of the current playing group. The team performed exceptionally well in Toronto during the Auty Cup and showed true fighting spirit which is a trait that is so important to what we are building in the United States.

“I have no doubt the players will gain a great deal from this tour and continue to build on the most recent success, continuing to understand their roles and responsibilities within the team and country.”

USA Project Manager, Eric Parthen, said: “Given this is the first international tour that incorporates the new marks of USA Cricket, we will be providing fans an opportunity to support the team through the purchase of official team apparel.”

“Additional fan engagement initiatives are being considered to bring unprecedented coverage of this tour to supporters in the United States.”

Team USA will arrive in Abu Dhabi on November 28 for training and preparation before matches against Nepal and Kenya on December 1 and 2. Matches versus Oman are slated for Muscat on December 4, 5 and 7.