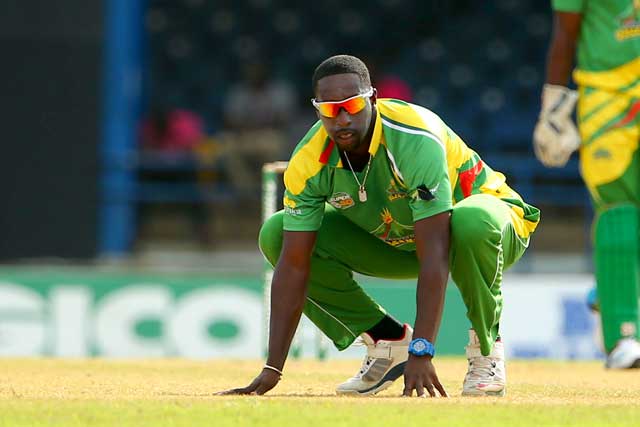 By Ravi Madholall in Toronto
His last representation for West Indies against New Zealand in Barbados (2014) doesn’t mean it is the end for off-break bowler Shane Shillingford.

The Dominican, who featured in 16 tests, is plying his trade in North America, and relishing the opportunity to play for Ontario Cricket Academy in the current Toronto and District Cricket Association Elite tournament.

The 34-year-old Shillingford stated that he is anxious to reclaim his test spot but cognizant of the fact that consistency will get you back at the top.

So far Shillingford has been consistent and mentioned that the cricket is competitive and still learning a lot of things to enhance his game. “The matting pitches [are] very good and I love bowling on them; not a big difference from the turf; but I just enjoying my game here in Canada,” Shillingford disclosed.

In his latest game at Toronto Cricket, Skating and Curling Club ground, Shillingford smacked a cameo 29 from just 17 balls and many of his players would have felt that the right-hander is cable of being a genuine all-rounder because of his impeccable timing.

His team only mustered up an inadequate 210 all out in 49.4 overs while Toronto replied with 186-5 in 34.5 overs when rained curtailed things. The hosts won the game by better run-rate.

Shillingford shared the new ball and claimed two wickets for 29 from his eight-over spell. “I am definitely happy to make a contribution for my team despite losing but we have to keep working harder and harder giving the fact you have got quality players on the oppositions and that also really shows the level of stiff competition in Canada,” Shillingford, who has appeared in 117 first-class matches for Windward Islands, related.

Since Shillingford will be heading back to the Caribbean for the upcoming Caribbean Premier League (CPL) annual and fifth T20 tournament, he is set to miss out on more matches but mentioned that he may return in 2018.

He said he will be focusing on the job ahead to help St. Lucia Stars emerging victorious in the CPL T20 tournament which will span from early August to early September with fixtures across the region and in Florida.

“I think we have a good team to do well in this year’s CPL; we just have to go out there and play positive cricket; everyone knows it is a huge tournament and great players coming from around the world to participate,” Shillingford, who was called for illegal bowling action once, expressed.