The Excitement Of PSAL Cricket 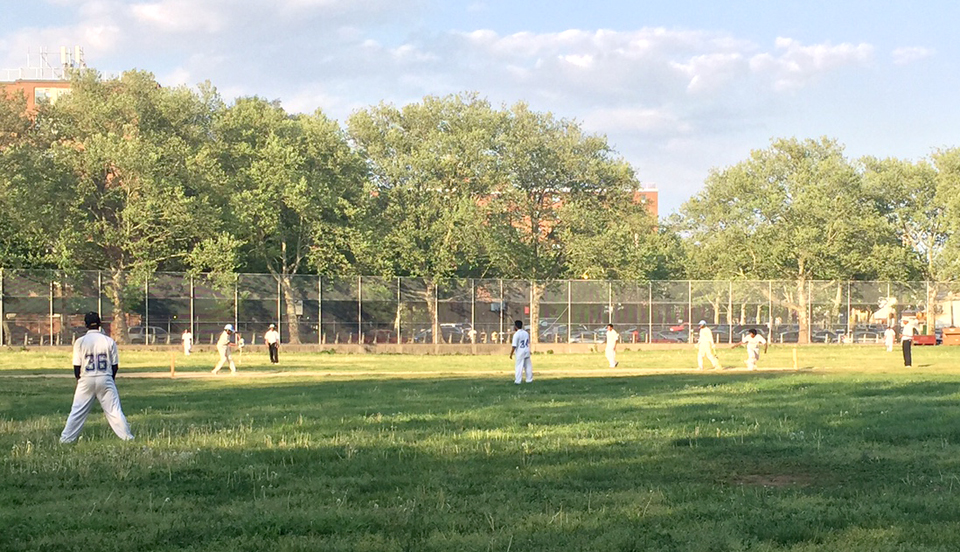 The scene from a PSAL game of 2015 season. Photo by Shiek Mohamed

By Sam Sooppersaud
The winter of 2015 has been a brutal one. The incessant snowfalls, the bone-chilling cold, the high winds (not to mention the heating bills) have taken a toll on all of us. It is now the spring season. However, it is still unseasonably cold. But humans are getting out more and more on the streets, doing their thing.

For cricket fans, I think the winter may have been harder for them to bear. Fans are, by the nature of their love of cricket, the outdoor types. Imagine being housed up, with no cricket around! Yes, there is cricket on the tubes, but to subscribe to these cricket programs cost “some good” dollars. So we sit back and wait: not waiting for the senior leagues to start. We sat and waited for the PSAL cricket to start, knowing that as early as April that tournament usually begins.

Well, cricket fans, the PSAL cricket tournament is in full swing! In fact, the first game was played on April 1st. As usual we are seeing some very exciting youngsters displaying their cricketing skills. In fact we’ve one kid who has already scored two centuries. Numerous bowlers have taken close to 15 wickets, considering that each school has played only seven games; and some less.

The competition is getting “hotter.” The youngsters are having fun. We are seeing some exciting cricket. In the program there are numerous coaches that are working “their tails” off to get their youngsters into tip-top shape. The staffs at the PSAL offices are, as usual, the catalysts that make PSAL cricket so successful.

Come out and judge for yourselves. Most games are played in Brooklyn: Marine Park, Seaview Park and Gateway Park (Erskine Field). In Queens: Baisley Pond Park, the Park at Foch Boulevard and Barron Street, (The Cage), and Kissena Park. In the Bronx: Van Courtlandt Park. Games start at 4:00.P.M. weekdays. On Saturdays, games (when scheduled) start at 10:00am. If you are in the area of these parks, drop by and watch some cricket.

Which school would come out on top in 2015! It is hard to say. There are some schools that are showing some dominance. But Twenty20 cricket being what it is, the outcome is very unpredictable.