By Dervon Wallace
Former USA captain Steve Massiah blast his way to a magnificent century as his Villagers team eased into the semifinal of the MCL Roy Sweeney Twenty20 with a convincing 64 runs victory over arch rival Westbury Cricket Club in quarterfinal action this past Sunday September 20th at Idlewild Park. 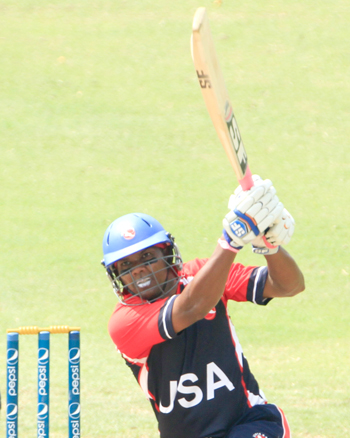 Steve Massiah hit a brilliant 107 from 55 balls which include eight fours and eight sixes.

With the game reduced to an 18 over per side affair, Villagers captain Cliff Roye won the toss and elected to bat against a Westbury team that was missing a few first team regulars. To open the innings for the two times defending champions, strode to the middle were Massiah accompanied by another former USA captain Richard Staple.  The pair showed there intent early and it was clear they weren’t willing to suffer a third straight defeat to Westbury, having being on the losing end in their two previous meetings earlier in the season.

The two former USA stand outs posted 116 in ten over before Staple 46 (30 balls 3×4 3×6) was caught on the deep extra cover boundary by Devon Campbell off the bowling of Peter Gilbert.  Massiah was joined   by another former USA national player in the form of Glenmore Hall, the latter seems a bit out of form but manage to rotate the strike with his former national captain. Massiah was in a dominant mood, striking the ball to all parts of the ground clearing the boundaries at will, much to the delight of the appreciated crowd that conveyed upon the park to see two of MCL top clubs battle it out. He brought up his century from a mare 48 balls; this was his third hundred in his last four innings against Westbury dating back to a master class 109 in the 2014 Clement “Busta” Lawrence 40 overs final which helped Villagers defend their title after being precarious place at 32 for 3 early on. The stylish right-hander was dismiss caught behind for a brilliant 107 from 55 balls laced with 8×4 and 8×6 with the scoreboard reading 170 for 2 in the 16th over.

Hall 18 (13 balls 2×4) was caught by Campbell off the bowling of the impressive Gilbert, George Adams and Sashane Anderson were unbeaten on 11 and 5 respectively as the Villagers innings closed at 189 for 3 from the allotted overs. Gilbert was the pick of the bowlers finishing with 2 for 19 from his 4 overs and Barrington Bartley 1 for 35 from 4 overs.

In reply Westbury lost wickets regularly and with the run rate mounting, it was a comfortable day at work for the Villagers bowlers. Bartley wasn’t to be undone as he always seems up for the Villagers test, he caved his way to a top score of 63 (55 balls 7×4 2×6) before his stumps were rattled by his close friend Rashard Marshall, both grow up playing youth cricket for Jamaica at different age group levels and it was clear their build a bond, which was evident as both joked at each other throughout Bartley’s inning. Captain Clinton Lewis 27 (20 balls 3×4 1×6) was the only other batsman to get into double figures, the inning ended at 125 for 7 from the allotted 18 overs. Adams finished with 2 for 11 from 3 overs; there was a wicket apiece for Talisman Gordon, Melroy Kingston and Marshall.