Too Spicy For Cosmos

By Sham Ali
(Celebrating 34th Anniversary – Match #1046):- Spice Island seasoned Cosmos last Sunday at Marine Park in the final round of the Metropolitan Cricket League Roy Sweeney Twenty20 competition and signaled the end of the 2017 season for Cosmos and half of the teams in the league in mid August. 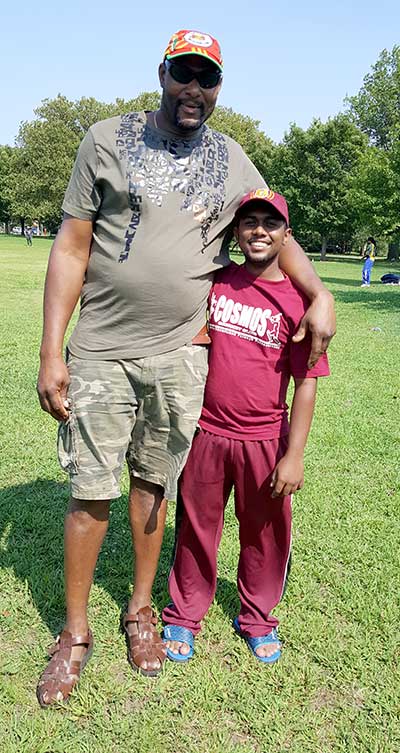 For just about the power play overs on either side of this match Cosmos had the control in their hands, and appeared to be the side more determined for the challenge, but then a few crucial misses; a story told many times this season, exposed the understandable experiences of this young side.

Kevin Prince appeared inspired in his new role with the new ball, and he looked the part to spearhead the attack in the years ahead. He struck with his first ball that kissed the edge off a tentative push from L. Chaitan, and wicketkeeper Daniel Chuninlal cleaned up with an excellent catch low to his right. In his next over, and a repeat of his first ball he clipped the edge of K. Parris, ‘snicko-meter’s spike was off the graph’ but no response from the umpire, heads fall. Parris went on to stroke a breezy 74 runs partnership after eight overs with Andrae Hooper to give Spice Island a solid foundation.

At the change Parmanand Sanicharan removed Hooper (22) to a well judged catch by K. Prince on the mid-off boundary. The danger man, David Williams, relished a life when he pulled his first ball to Jonathan Prince on the mid-on boundary. Williams survived another three chances and in the process he posted a 67 runs partnership with Parris to take the score to 141 for 3 in the 15th over before Parris edged K. Prince again.

And in the mix of an accelerated run rate Cosmos poster boy, young Alex Chuninlal brought calm and showed some maturity beyond his years. Even though, he shelled a stinging return catch from Williams in his last over, but managed to keep him quiet in a tidy spell of 4 overs for 19 runs.

Unfortunately, Cosmos earlier errors proved to be very costly as Williams blazed his way to a charmed 75 (3’4s, 7’6s) off 32-balls to take Spice Island to an imposing 197 for 5 off their allotted 20 overs.

Amjad Khan gave the Cosmos inning a spark as he and Daniel Chuninlal raced to 47 in 4 overs. But when he chased a wide and handed the man at extra-cover a low stinging catch the rest of Cosmos’s batting order went with him. The middle order had no appetite for the spice that was served out in the middle, but certainly for that after the match as Cosmos total trickled to 67 all out. It was a comprehensive victory Spice Island; one of the few clubs in the MCL that has maintained its tradition and class.

And that brought a fitting end to a season in which Cosmos had the privilege of Ashmul Ali on the field in this match as the Spice Island boys noted; a stalwart in Metropolitan Cricket League over the years, a champion and long standing captain of Cosmos over the years. Cosmos has also seen the emergence of some young promising cricketers in Wicketkeeper/batsman – Daniel Chuninlal. Medium Pacer – Kevin Prince. Paceman – Thohidhuzzaman Rana. Batsman/Leftarm chinaman – Parmanan Sanicharan. Rightarm legspin – Surendra Persaud. Wicketkeeper/batsman – Jonathan Prince. Rightarm legspin – Noah Vaas, and Cosmos new poster boy right-arm offspinner/Batsman – Alex Chuninlal.

In the long and short of things much will depend on this new batch of young players at a time when Cosmos has seen the exit of some. The club has been there many times before, but refused to be infected by it. And like all good clubs Cosmos responded to the challenges with the required purpose and unselfishness, and irrespective of the unhealthy echoes Cosmos has successfully completed its full schedule and met all of its commitments for the season, and that is the hallmark of a good club.

Throughout this season this young group of players have remained firm and focused and exercised the perseverance and commitment that was needed. They may be short on some firepower for now, but not on discipline, talent and purpose. In the middle you saw the freshness of youth, and sensed a depth of resilience and real toughness, and that was of the defining feature on display in this last match and throughout the season.

Good luck to the teams in the playoffs.