Top Players Show Their Talent On Day One 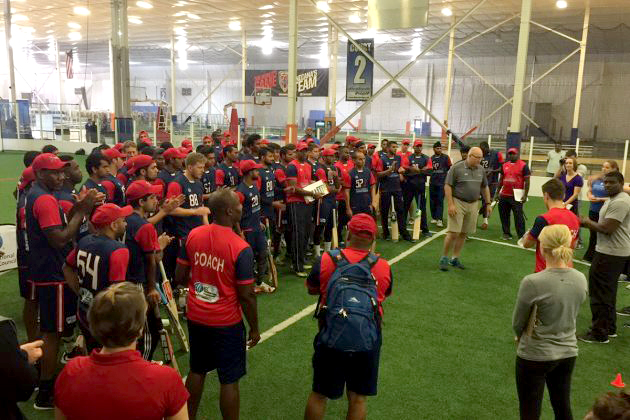 Players of the Americas at day one of the trial. Photo: ICC

More than 80 invited players to Phase One of the Combine are competing for an invitation to Phase Two next weekend where they will then attempt to earn a spot on the ICC Americas team.

Top cricketer from Argentina, Bermuda Canada, the Cayman Islands and the United States showcased their talent on Saturday in Indianapolis at the first-ever International Cricket Council’s (ICC) Americas Cricket Combine.

Indianapolis Mayor Greg Ballard was on hand to observe the early sessions. While talking to the coaches, he said: “In Indianapolis, sports is more than just a pastime, it is an economic driver and part of our global identity.”

Players spent the morning participating in fitness tests, led by staff from St Vincent Sports Performance. The Indianapolis-based organisation has been involved in the NFL Combines since 2001 and has worked with national governing bodies, including the USA Track & Field and, USA gymnastics.

At the conclusion of the session, Ralph Reiff, Executive Director of St Vincent Sports Performance, said: “The cricket athlete is someone we’re getting very accustomed to seeing and we’re gaining a quick affinity to the sport

“This inaugural Combine has been a great experience so far with the level of enthusiasm and talent,” said Mike Young, internationally renowned American fielding coach.  “I’ve been all over the world in international cricket and am incredibly impressed by the facilities here in Indianapolis.”

In the afternoon, players went through cricket skills assessments in the areas of batting, bowling and fielding at the World Sports Park. Players also participated in exercises to assess character and leadership ability. This is the second international cricket event the facility has hosted this year.

More than 80 invited players to Phase One of the Combine are competing for an invitation to Phase Two next weekend where they will then attempt to earn a spot on the ICC Americas team to compete in the West Indies Cricket Board’s (WICB) Nagico Super 50 tournament in January. Phase One of the Combine will continue through September 21 with Phase Two taking place September 25-27 at the World Sports Park.