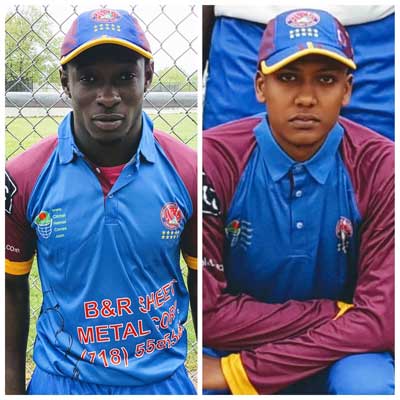 Carmichael turned in a captain’s knock of 53 and was well supported by Mohabir’s unbeaten 24. The duo returned to clip the wings of seven Falcon batsmen for just 16 runs and lead a 129 runs victory last Sunday. The day started with FCC showing up late for the toss and then forcing a delay when their captain threatened to ‘pick up his matting and leave’ after he was informed by the umpires that RHLCC was awarded the toss. By the time the unnecessary drama was all said and done, on a brilliant sunny day, a 40 over match was reduced to 35 overs with RHLCC choosing to take first strike.

With all the hesitation on the part of FCC they stared well enough thanks to consistent catching in the field. Dominique Rikhi followed up his century in the previous game with a quick fire 21 before he was the first batsman to depart. His opening partner, Altaaf Habibulla (8) would fall shortly after along with Nadesh Basdeo (5). This left RHLCC at 56 for 3 in the 12th over.

Stroke maker, Trevor Henry, was joined by skipper Trinson Carmichael and the pair settled in to stabilize the batting on a heavy outfield. Not getting full value for shots, Henry only found the boundary 1 time. This forced him to go over the top. He blasted three sixes as he and his captain put on the highest partnership of the day, 51.

Carmichael announced his intention early when he dispatched the 5th ball he faced out of the park for a maximum. After losing Henry for 40 with the score on 104, the left handed Carmichael took over the senior batsman roll. He lost Inzy Khan, Joel Boohoo and Naresh Rambharos in quick succession before Mohabir joined him at the crease. The RHLCC captain would carve four boundaries and hammer four sixes before he departed in the later stage of the 35 over inning for 56.

Mohabir went on to play a handsome hand in the closing overs hitting two sixes and two fours in a quick fire 24 not out. Once again, much like in the club’s opening game of the season, under-15 player Moien Khan featured in a vital late order partnership of 29 runs; scoring 7 not out to help RHLCC to 187 for 9 off the 35 overs.

Bowling for FCC Ray Francis picked up a five wicket haul for 32 runs. He was supported by Kelvin Harripersaud’s 3 wickets and Manoj Shamsundar’s 1 wicket.

Inzy Khan led the way with the new ball knocking over the pegs to claim RHLCC’s first wicket in defense. Paul Ashram offered some resistance to post a top score of 22 but the remaining FCC batsmen folded with little fight and no one else making it to double figures.
Jamiel Jackman, Altaaf Habibulla and Khan bowled brilliantly with the shine on the ball and picked up 2 wickets amongst them. It was with the introduction of spin that collapsed the FCC batting occurred, however.

Mohabir led the way with 4 wickets for 6 runs off just 2.4 overs while Carmichael picked up 3 for 10 off 7 overs along with a run out to wrap up the FCC inning for 58 all out. This gave RHLCC its third consecutive victory in excess of 100 runs.

The win takes the undefeated RHLCC to 4 wins, 1 no-result and sets up a top of the table clash this Sunday at the cage between the current number one ranked Everest/ACS and RHLCC.

RHLCC is inviting the entire cricketing community to come out and watch the game at The Cricket Cage in Baisley Park (Corner of Foch Boulevard and Barron Street in Queens, New York) this Father’s Day, Sunday June 18th. There will be an at the park raffle along with food and drinks to partake in. The action bowls off from 1 PM on Sunday.