By Ajit Nair
It is esoteric to see the shorter format cricket played in whites for the millennials. Whites have always exemplified test cricket and wearing whites on the field is either a matter of pride or struggle for cricketers who play the game today. Playing in whites is renaissance for Gen-X players who still play this game. I remember my playing days for my university where I would return home with pride in whites that was replete in dirt & mud to a yelling mother.

A tournament organized by St. Columba’s Cricket Club on the Dr. Arnold field in Middletown Rhode Island has the same legacy in New England. It is the last one in the New England cricket season before the players go on their winter sabbatical. The tournament organizers are one of the most passionate group of energetic individuals who hold this cause very dear to their hearts. It is an honor for the clubs to get an invite to play in this tournament. The ground although in its dimensions is a bit smaller but unmistakably requires skill to score on this ground. Its’ a well-curated flat outfield and cement wicket laid with AstroTurf, a batting paradise to say the least. But with skillful bowling, there has been a few economical bowlers who played this tournament over the years.

St. Columba’s had both their teams playing the tournament and with their track record, they were serious contenders of the trophy but only one of them made it to semi-finals. Boson Gymkhana Sports Club, Boston Cricket Club and United Rhode Island Cricket Club were the other three teams eyeing the trophy. BCC a solid team, well backed by their history to turn games around were serious opponents to BGSC in the semi-finals. URICC faced the undefeated St. Columba’s Kings in their semi-finals. Both games were crowd pleasers for different reasons. BCC v/s BGSC was a well fought and a grinding win for BGSC while URICC v/s Kings turned out to be a one-sided affair. URICC piled up 280/5 in their allotted 24 overs on the back of Abdul Samad who was in a mood of hitting sixes that day. Unwittingly Kings fell on the wrong side of Samad who hit them all around the park for 19 sixes. Some of their bowlers maybe scarred for life. 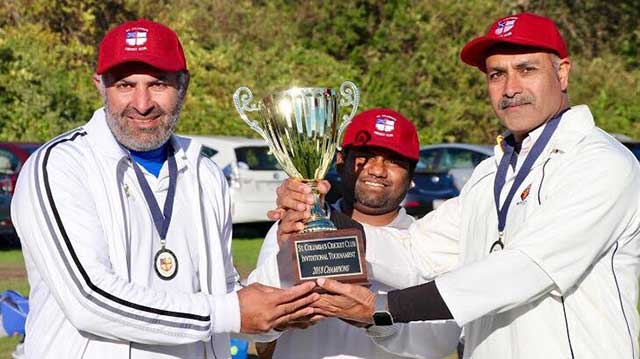 After the confident march by both teams URICC and BGSC met for the shortened finals of 26 overs per side which started slightly late after the unwelcome morning showers. BGSC won the toss and elected to field. The old fox Parak Anantha and the very economical Dilip Chavan led the attack for BGSC and with their slow right arm orthodox bowling frustrated the hard-hitting Abdul Samad and Anil Yedugani of URICC. Within no time their plan paid off and Parak got the danger man Samad out caught at cow corner to a brilliant catch by Pratik Dudhane who hesitatingly attempted the catch and with his long levers held on to a beauty. Next man in equally dangerous Waqas Nawas was also sent back immediately in the same fashion by Parak & Pratik which dented the URICC batting line-up. Then on damage control, Sandeep Reddy played his natural game working the ball into gaps and gathering runs at a minimum risk. Anil was bowled over by a good incutter from Dilip and URICC were behind the 8-ball from thereon.

At 42/3 Bilal Ahmed walked in to play out the innings and kept the bowlers drooling for his wicket. At 122/5 hard-hitting Muqadas Raza who was long overdue for the revival of his reputation to denigrate the bowling attacks walked in and without disappointing the crowd teed off with a six over covers and a four with a mighty pull in consecutive balls. The URICC camp that was quiet all along sighed a breath of relief. Then came one of the best partnership of 122 runs so late in the innings between Raza (78 of 31) and Bilal (83* of 50) taking URICC to a decent 244/6. URICC ended up at a formidable score of 247/7 in their allotted 26 overs.

BGSC set-off with some aggressive batting from Midhun Kumar and Pawandeep Heer but the attack was short lived as Midhun got caught at square leg to a good swinging delivery from Pawan Daruri who led the attack with Waqas Nawas for URICC. BGSC altered their plans after their openers fell and the batsmen played with caution by accumulating runs in singles and doubles with an odd boundary here and there. With consistency and tight bowling, URICC kept taking wickets in frequent intervals and within no time BGSC were reduced to 36/4. The skipper Bikram Singh decided to take matters into his own hands and strode in with determination. The key match turning partnership of 111 runs at that stage between Pratik Dudhane and Bikram Singh took the score to 147 and Bikram secured a wonderful half century with some urgency. Bikram was retired hurt at the end of 17th over and Pratik was left alone to continue. 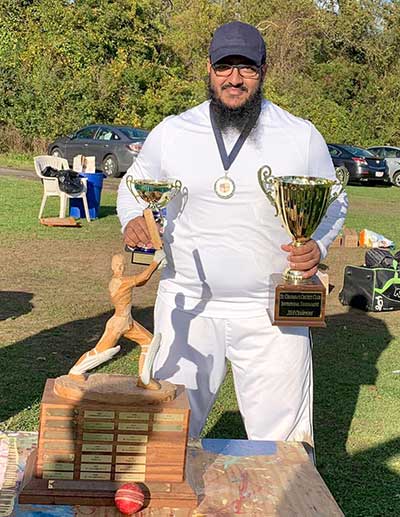 Without disappointing Pratik compiled a skillful and marvelous century in 61 balls. That put BGSC back in the driving seat and coasting towards victory. Pratik holed out to deep square leg soon after his century to a superb catch by Anil Yedugani diving forward to pouch a difficult one. The pendulum swung back giving a glimmer of hope to URICC once again. BGSC needed 25 of the last two overs. Nikhil Sikka was commissioned to bowl the penultimate over, his first over being rather expensive, he bowled the best 6 balls of the tournament giving only 7 runs and leaving a good 18 runs to defend in the last over. The last over bowled by Anil Yedugani didn’t start well; a wide and a four to deep square to a stray delivery left BGSC to score 13 off the last 5 balls.

It all came down to 6 off 2 in the end. The second last ball was another loose one from Anil that gave away 3 runs to the quick runners Parak Anantha and Vivek Choudhary. It was 2 to tie and 3 to win off the last ball. Anil’s chance to redemption did give him his opportunity and he bowled a perfect wide line yorker which was drilled to long off by Vivek but an accurate throw from Bilal Ahmed got Parak caught short of his crease on the second run. The heart-thumping final ended with BGSC at 246/8. URICC were penalized 5 runs for their slow over rate and the match was awarded to BGSC. But, in the spirit of the game and respect for such a hard fought contest the captains and the officials decided to declare the teams joint winners of the 2018 Championship.

The conundrum for many after the final was whether to feel triumphed or defeated. Both teams got their medals and Winners’ Cup. Abdul Samad irrefutably became the MVP for his blistering 280 runs with 2 centuries in 3 innings and Dilip Chavan graciously accepted the most economical bowler award for his stingy RPO of 5.5. The two men of the finals were Pratik Dudhane from BGSC for his 102 and Bilal Khan from URICC for his unbeaten 83. All the awardees collected their trophies and celebrated the day with food and drinks provided by the gracious hosts. The morals of being loved and we all are winners is the take away from this game. It leaves a hallmark for future touring teams to adhere to the rules strictly or end up in enigma.