USA Bounces Back With True Determination

Sir Vivian Richards Stadium, North Sound, Antigua – The USA men’s team bounced back with a decisive victory over the Leeward Islands Hurricanes, after losing all four of their previous outings in the 2018 Cricket West Indies Super 50 Cup matches.

Having demonstrated that they can bat out 50 overs in three of their four attempts, Team USA seemed focused on adding a “W” to that accomplishment, and that they did, albeit against a somewhat depleted Leeward Islands squad. Nonetheless it was a morale booster for the fledgling squad on a “self development mission” in the Caribbean. The Leeward Islands’ team without its big-hitting all-rounder Rahkeem Cornwall, Marlon Samuels and Kieron Powell, gave the USA an opportunity to compete with players on par with the current USA squad.

Leeward Islands Hurricanes won the toss and invited USA to take first strike on a somewhat placid strip, the same one used for the USA vs. Kent match 48 hours earlier. The USA took to the field with openers Sunny Sohal and Jaskaran Malhotra. The latter was the more aggressive of the two batsmen with Sohal playing a bit more tentatively. However, it was immediately noted that the two batsmen were intent on reversing their previous approach to striking the ball with greater confidence and finding the gaps. Their running between the wickets had a new look – running the first run quickly and looking for seconds. They helped themselves to seconds on at least eleven occasions, compared to their outings against Jamaica and Kent. It was a sign of improvement in addition to seemingly wanting to bat out all 50 overs.

Posting an opening stand of 81, the USA looked to take advantage of all opportunities thrown their way, although Malhotra was the first to depart with 38 (4x4s, 1×6) off 73 balls and trapped lbw attempting to sweep spinner Justin Athaneze. Despite facing 54 dot balls, Malhotra’s body language and attacking stroke-play kept the Hurricanes on edge. Sometimes a bit of a positive attitude can be so very important. 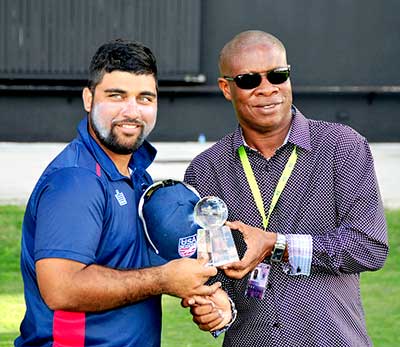 Sunnny Sohal’s confidence has been on the rise as the tournament has progressed, and it was a delight to see him reach 50 (2x4s, 1×6) off 90 balls with 60 dot balls. It was somewhat painstaking against the Hurricanes’ spin attack, but worthwhile in helping establish a sound foundation for the batsmen to follow. The Hurricanes’ Terrance Warde’s figures of 9-0-34-3 put a dent in USA’s aggression, dismissing a tentative Xavier Marshall, for 8, skipper Ibrahim Khaleel for 5, and later Marunal Patel for 12, placing USA at 140 for 6. That put the brakes temporarily on USA’s drive to score at least 225 for a fighting chance. However, with worthwhile contributions from Timil Patel, 22 off 27 balls, Elmore Hutchinson, 16 off 19 balls and Adil Bhatti not out 13 off 14 deliveries, it showed that the USA may have turned the corner in its approach to scoring while still occupying the crease. The players ran their first run very quickly, sometimes with reckless abandon for body or limb. In addition, every effort to find the scoring gaps was evident and the effort paid dividends.

Two parts to the mission had been accomplished – batting all 50 overs and posting a decent total against a Leeward Islands Hurricanes XI. Could the USA achieve the third part of the mission – bowl well enough to defeat their opponent?

The Hurricanes took to the middle, no doubt very confident that they had the firepower to surpass the target of 194 required for a win. However, USA’s strength throughout the tournament has been its bowling, more so than its batting. The USA bowlers for the most part have held up their end of the bargain with the odd lapse here and there. There were only three extras given up in the inning. The USA batting has come on strong, as the tournament has progressed, although not always with more than one cylinder firing at times.

The USA would strike very early snatching the wicket of Devon Thomas, 1, trapped lbw by Elmore Hutchinson in the third over. Leeward Hurricanes 5/1. Keacy Carty would exit similarly without scoring, a victim of Hutchinson. Leeward Hurricanes 5/2. The USA’s strike bowler was on point, however, he was taken off after 5-0-11-2 and Saurabh Netravalkar (10-1-17-2) was introduced into the attack. The USA bowlers continued to dispatch Leeward Islands batsmen with regularity until the score was 41 for 5 and some of the Leeward Islands supporters abandoned their seats rather than witness the carnage, or thought it was better to head over to the Coolidge ground to watch the Guyana Jaguars take on Kent County.

To say the USA players were pumped would be an understatement. The attitude of the players on the field was one of unbridled enthusiasm as adrenalin squirted from every pore of their being. The USA players fielded exceptionally well with very few unearned run opportunities afforded the Hurricanes. It was a 180 degrees turnaround from their last outing, against Kent.

With the Hurricanes backs against the wall, it was now up to USA to announce their late arrival to the party in an emphatic manner. However, they failed to do so in a manner that demonstrates authority. With the score at 41 for 5, two 20-run partnerships added another 40 runs, as the USA eased up on the gas pedal and appeared to be searching for the brake pedal. Why? With Hutchinson having only bowled a spell of five overs, it seemed the perfect time to reintroduce Mr. Hutchinson to the attack with another category 5-hurricane assault on the Leeward Islands, but he was denied mop-up duty.

It is often said that when you have your foot on the opponent’s neck, don’t ease up, until he cries uncle or respect is accomplished. With the score at 93 for 9, the USA’s failure to bring back their strike bowler Hutchinson can only be described as one of three things, sympathy for the Hurricanes, resting the big guy up for the Guyana Jaguars clash on February 12 or allowing Nosthush Kenjige to grab a fiver. It is believed that the latter reason was the overriding one with Kenjige enjoying figures of 8-2-38-4 at that moment.

Hurricanes’ opener and skipper Montcin Hodge with 22 off 61 balls and Shane Burton were the only top order batsmen to post any real resistance to the USA’s bowling attack up to then. Then came Justin Athaneze in a belligerent attack at the tail end and on the USA bowlers. His was a wicket that simply would not go away, or die. The number nine batsman took advantage of the USA’s complacency or unwillingness to wrap things up and catch an early bus back to the hotel. Which was more important, Kenjige capturing a fiver in the match or USA winning by a greater margin?

Sunny Sohal with a half-century contribution to the USA’s total was adjudged Man-of-the-Match.

Match take-aways: Team USA shown true grit in reentering the arena where many thought they did not belong, except for the growth experience. However, they came, they were beaten, they were the beleaguered ones, but they persevered and notched out a victory. If it’s just that one victory, it may very well have been the catalyst for change in USA cricket. The confidence built from competing with one’s peers and showcasing the potential is tremendous in the wider perspective of USA cricket development. If the players can build upon the experience gained in the USA vs. Leeward Islands Hurricanes match, it would have been a worthwhile investment.

The USA players demonstrated the determination necessary to stand up and be counted. Yes, it’s too early to celebrate with reckless abandon, the accomplishments thus far, but recognition is due, given the previous performances of the players and what they can accomplish if given the right tools and latitude for growth.

The USA still has to face the Guyana Jaguars, Kent CCC, and the Jamaica Scorpions once again. Time will tell whether Team USA has learned anything from the earlier encounters against the same opponents, and whether they are able to make the right adjustments ahead, or take the right fork in the road when it presents itself.

From the perspective of empowering the players, it depends on what’s ahead for USA cricket in the area of competitive tournaments, exposing this or another group of players to cricket at the level currently being experienced. The establishment of a high performance training camp, or a few such “mobile” facilities/combines would greatly fast track the players and others waiting in the wings. The momentum has been created, and should now be further encouraged. 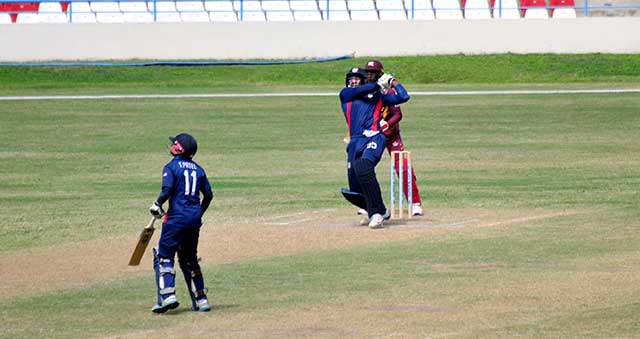