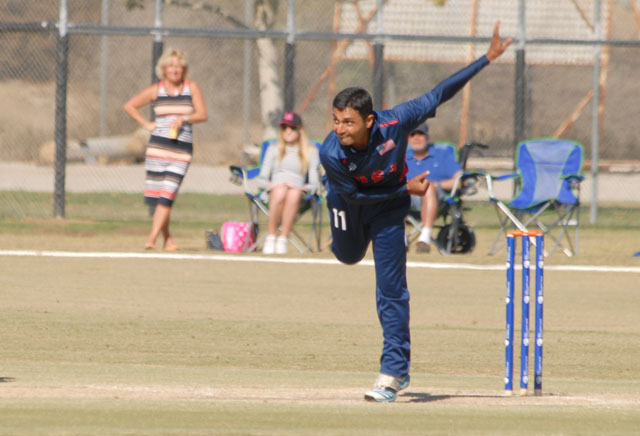 Timil Patel picked up 3 for 36 in USA win over Malaysia. Photo by Shiek Mohamed

Canada won its second match of ICC World Cricket League (WCL) Division 3 to secure top position in the standings after defeating Oman by 83 runs at the Lugogo Cricket Club on Wednesday, 24 May.

Canada opener Bhavindu Adhihetty top-scored with 44 and Satsimranjit Dhindsa took three wickets for 50 runs to ensure a 83-run victory against Oman, despite Zeeshan Maqsood’s fightback innings of 63 from 62 balls.

Arnold Otwani (47) and Shahzad Ukani (46) helped the hosts to victory after leading them to 274 for nine, complimented by the bowling attack led by Mohammed Irfan (five for 38) which saw Singapore being bowled out for 151 in 44 overs.

In the final match, USA can thank its strong bowling performance as they won by six wickets at Kyambogo Cricket Oval, Kampala, dismissing Malaysia to 117 in 40.5 overs and scoring the winning runs in 28.1 overs.

Canada won back-to-back matches as a number of the Canadian batting line-up put in strong performances. The opening pair of Bhavindu Adhihetty (44) and captain Nitish Kumar (33) added 71 runs, before Kumar was dismissed. Navneet Dhaliwal then contributed with 31, before being run-out by Oman’s Aqib Ilyas. Rizwan Cheema scored a quickfire 42 from 25 balls, including four fours and three sixes, and Nikhil Dutta followed suit with 41 runs from 34 balls including three fours and two sixes as Canada finished on 274 for nine.

In response, Oman buoyed by its opening day victory, lost the wicket of Khawar Ali on the second ball of the innings as he was run-out by Adhihetty and that set the tone for Oman’s afternoon. Zeeshan Maqsood scored 63 runs including seven fours and two sixes to give some hope to Oman’s chase. It was not enough as Satsimranjit Dhindsa took three wickets and Oman were bowled out for 191. 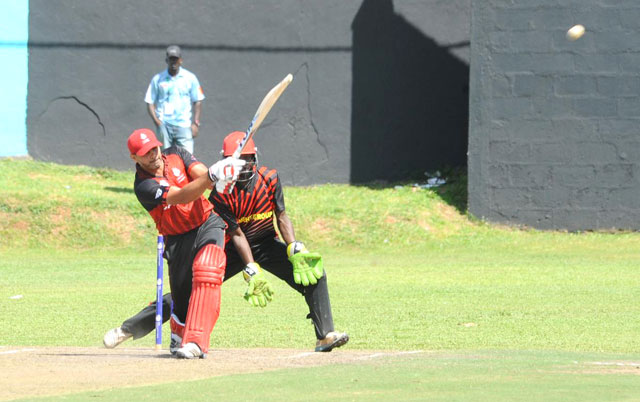 Hosts Uganda batted first against Singapore at Entebbe Cricket Club and posted a competitive score. Three good innings from Hamu Kayonda (41), Shahzad Ukani (46) and Arnold Otwani (47), supported by 25 not out by Deusdedit Muhumuza helped the African side to 217 for nine in its 50 overs. Good bowling spells from Selladore Vijayakumar two for 39 and Anantha Krishna two for 37 gave Singapore an achievable target to chase down.

Singapore started positively and looked on course as Chaminda Ruwan (40), Anish Paraam (20) and Arjun Mutreja (35) put the team on 132 for four after 35.5 overs. Mohammed Irfan had other ideas as the Ugandan bowler removed the lower order ending in figures of five for 38 and Singapore being bowled out for 151 in 44 overs.

USA put in a great bowling performance at Kampala as it bowled out Malaysia for 117 runs. The wickets were shared amongst the USA bowlers with Timil Patel taking three wickets for 36 runs and Ali Khan (two for seven), with captain Steven Taylor (two for 12) chipping in. Malaysian batsmen Neville Liyanage (30) and Aminuddin Ramly (20) stood defiant in the middle-order, however, eventually relinquished as the team were bowled out in 40.5 overs.

In reply, USA only needed 28.1 overs to score the winning runs, Ibrahim Khaleel was the star man with 49 runs not out including six fours. He was supported by Steven Taylor’s 25 runs from 42 balls and Camilus Alexander 30 not out, scoring the winning runs with only four wickets down.

Thursday is a reserve day, and fixtures will resume on Friday.