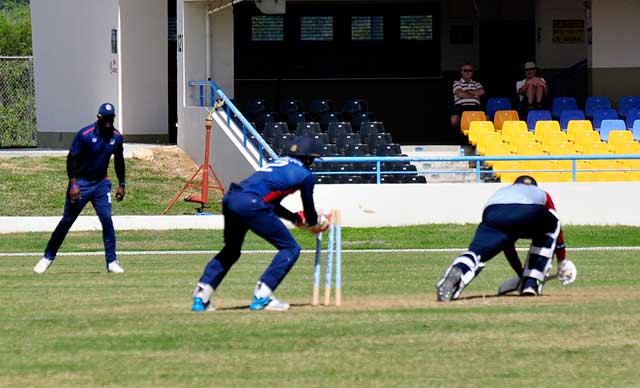 Sir Vivian Richards Stadium, North Sound, Antigua – Coming off their third loss in the Cricket West Indies Super 50 Cricket Festival Cup, where the USA Cricket men’s team managed to bat for 49.2 overs; batting out 50 overs against Kent Cricket Club was an accomplishment, given the USA’s propensity to not bat out 50 overs. If that was the sole objective in the USA’s fourth match of the series, then “Mission Accomplished.”

However, the desire for a team to bat out the allotted overs must be associated with a plan to accomplish more than simply showing up and maintaining a presence at the middle. Nonetheless, that’s exactly what the USA did at the Sir Vivian Richards stadium, against a Kent Cricket club squad that’s struggling to stay among the leaders in the tournament. Upon closer examination, one would see that the USA had a better than good chance of actually winning the match against the Englishmen, rather than losing by a mere 27 runs.

After an excellent fielding performance against the Jamaica Scorpions two days earlier, dropping only one catch and not misfielding any balls that resulted in “unearned runs,” the USA men gave up 29 “unearned runs” including five boundaries that resulted from misfields. There lies the margin of victory by Kent.

Winning the toss and electing to chase Kent, the USA was off to a flying start with Elmore Hutchinson trapping Kent opener Daniel Bell-Drummond lbw without scoring, off his second delivery. The USA’s confidence was up, the players were psyched and pumped. Maybe the confidence exhibited led to complacency, despite Kent losing its second wicket with only 22 ticks on the board. It was the tenth over and Kent had already lost two of its top-order batsmen. 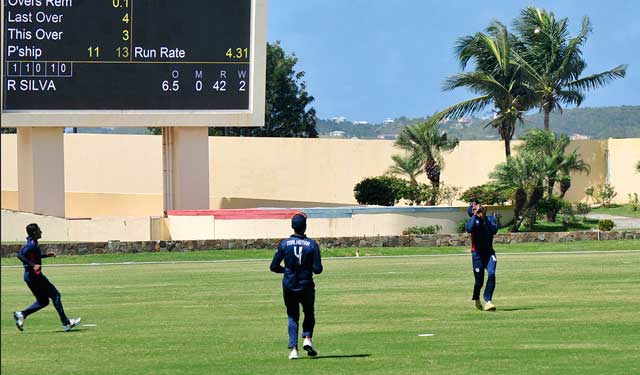 USA’s Prashanth Nair settles under the ball to catch Kent’s Imran Qayyum for 3 off the bowling of Roy Silva.

A 52-run partnership followed the USA’s early success, before Kent lost its third wicket 21 overs later and the score at 74 for 3. Zack Crawley was dropped off the bowling of Hutchinson when the batsman was on one. He would go on to add another 26 runs. At the other end, Kent’s skipper Joseph Denly was picking his way toward a ton with 10 boundaries and excellent running between the sticks. He would eventually be clean bowled by Roy Silver in the 46th over, four short of his ton and having faced 109 balls.

With Kent at 5 for 122, things looked very good that the USA would be able to restrict Kent to a score that was within reach of USA’s first victory in the tournament. However, what followed was a sixth-wicket 79-run partnership between Denly and William Gidman, taking the score to 201. The USA grabbed the next three wickets for the addition of only 14 runs, as Kent ran out of overs at 215 for 9. Would the USA be able to make the required 216 for victory?

The USA put down two catches, as their woes in the outfield continued to haunt them, adding to their despair and level of anxiety. They did manage to hold on to three catches, including one by sub. Prashanth Nair running around from deep mid-wicket to his right to dismiss Imran Qayyum on the last ball of the inning for 3, and off the bowling of Roy Silva. The USA bowlers stood the test of time and shared the spoils equally, with Roy Silva grabbing three wickets for 42 runs off his seven overs. He delivered 20 dot balls. Elmore Hutchinson bowled extremely well getting two wickets for 33 runs off his 10 overs, including three maidens and 43 dot balls. He was however, very unlucky not to have had a third wicket. Timil Patel enjoyed figures of 10-0-35-2 with 30 dot balls. Adil Bhatti and Saurabh Netravalkar each had one wicket. The Kent wickets fell at 0, 22, 74, 80, 122, 201, 201, 204 and 215. 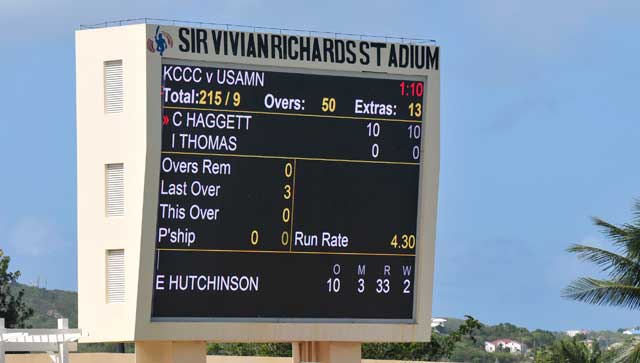 Team USA responded with an opening stand of 19, losing Sunny Sohal for 7 in the fifth over. They would lose their next wicket at 54, that of Xavier Marshall for a quick-fire 18 (4x4s) off 27 balls, with both batsmen departing via lbw, although Marshall’s looked somewhat doubtful. Jaskaran Malhotra was run-out attempting a second run with the score on 56.

Following Malhotra’s unfortunate departure after he looked very set on posting a big score, skipper Ibrahim Khaleel and Timil Patel posted a painstaking 64-run partnership 23 overs later. It was not that the batsmen were pinned down by precise bowling, but more like they were not willing to show any aggression and appeared to simply want to bat out the overs. Were they playing for a draw? It was a 50-overs one-day match. Duh! Balls that should have been hit firmly were simply patted to the opposing fielders. Singles were always those from the outset, with no effort to seek a second run or at least rattle the comfort of the fielders into committing mistakes.

Skipper Ibrahim Khaleel made an effort to consolidate the USA’s response with a painstaking 61 (5x4s) off 114 balls and 102 minutes, before he was caught off the bowling of Adam Riley. He faced 69 dot balls.

Match condition awareness was missing as the USA players when attempting to go over the top headed straight into the eastern wind, resulting in the ball stalling in that time zone and ending with relatively easy catches. Only one such mistake on the Kent side had a similar result. The Kent batsmen found the gaps with relative ease for the ones and twos, while the USA batsmen are still struggling to do so. The USA gave up 185 dot balls compared to Kent’s 177. That statistic tells you how closely matched the two teams were. It was an improvement over their performance against Jamaica, when they did not find the one’s and twos easily.

When stroking the ball with confidence, the USA batsmen have been able to score boundaries easily, as was evident in the match-up against Kent when the USA scored 16 boundaries. A similar number was recorded by Kent, although 10 of Kent’s 16 boundaries came off the bat of its skipper Denly who scored 96 runs and left 53 dot balls on the table. 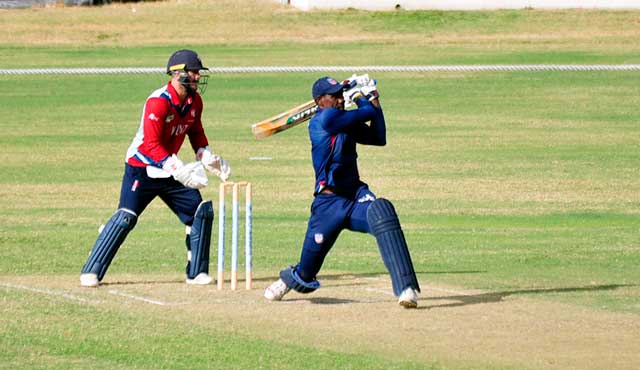 It was somewhat disappointing to see more scoring chances by Team USA not used to the maximum. Playing before a Caribbean audience that craves attacking and exciting cricket regardless of who’s in the middle, only added to the sense of watching matte paint dry. Yes, I am an advocate of the USA players developing their abilities to bat for longer periods of time, and to compete at the 50-overs level, despite most of the USA players coming from cricket communities in the USA where they are more accustomed to 20, 30, 35 and 40 overs formats. However, as cricketers aspiring to get to the next level of 50-overs cricket, the USA batsmen must score runs when offered the opportunity. That did not appear to be the mindset of many of the USA players, with the exception of few who were willing to take chances, instead of being occupied with emerging not out. Helping one’s team to victory, or at least a fighting chance to accomplish such often boosts one’s confidence.

Looking back on the USA vs. Jamaica Scorpions match up, the Scorpions despite their pedigree was not that much better than the USA, and so was Kent. Neither team dominated the USA in all aspects of the game. When analyzed, the loss to Kent looks worse on paper than the actual dynamics of the match may reflect, and that’s where the match plan and outcome diverges.

What was the USA’s game plan going into the match against Kent? Clearly, in opting to send Kent in to bat first, the USA must have thought it was a strip that favored bowlers and as such Kent would be restricted to a manageable total. Having accomplished that, what then was the game plan to win the match? Even if the game plan was to bat out the 50 overs, why not seize the opportunity to win the match when the opportunity to score presented itself? What did Team USA have to lose?

After losing Marshall in the 13th over lbw to a delivery somewhere outside the off stump and eternity, most of the USA batsmen went into hiding. Despite Marshall being gifted a life when on five in ninth over, he immediately after square-cut Denly for a boundary. The USA scored eight boundaries in its first 10 overs and 50 runs off 70 balls in 44 minutes. Later in the inning Elmore Hutchinson delivered two massive and successive sixes over long-on before being caught by a sub. off the bowling of Adam Riley. The USA seemed set to explode in the late overs and Kent had its share of misfielding, but nowhere as costly as the USA. 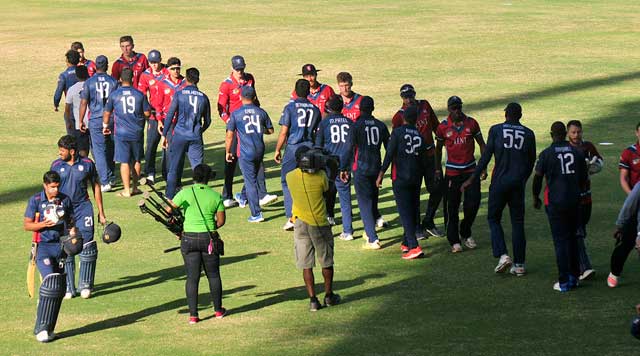 Players greet each other at the conclusion of the match.

Kent’s use of its bowlers was very astute and coupled with USA’s timid approach to scoring pretty much sealed the fate of Team USA, as the run rate for victory got larger and larger. Despite an electronic scoreboard with all the data one could ask for, it was as if the USA batsmen were unaware of where the game was headed and the role they had to play to reverse the trend. Maybe it was the instructions from the dugout, but the players failed to dig themselves out of a deepening hole. It was an opportunity to make a breakthrough and leave a favorable impression on all and win some fans, many of whom were not even aware cricket was played in the US of A.

Granted USA Cricket is currently a work in progress, however, a whole lot more work is needed for the progress anticipated. The work is now largely on the shoulders of the players who must assume their share of responsibility and step up to make worthwhile contributions.

If the objective of the match and the tournament is for USA to develop the stamina to bat out 50 overs, then that mission was accomplished, so far. What’s next?

USA plays Leeward Islands on Saturday, February 10 at the Sir Vivian Richards stadium, before coming up against Guyana Jaguars on Monday at the same venue. 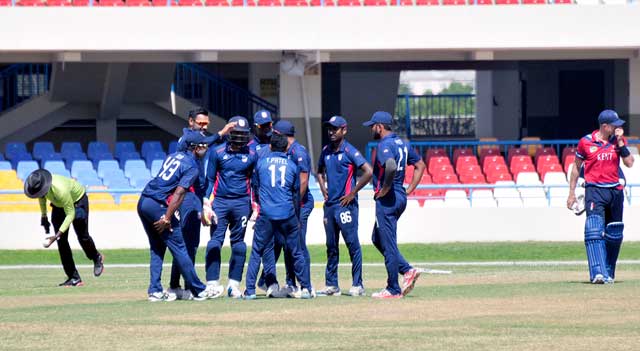 Team USA celebrate the fall of a Kent wicket.