The United States of America won its second match of the ICC World Twenty20 Qualifier 2015, beating Hong Kong by seven wickets in its penultimate Group A clash in Dublin.

After USA opted to field, the bowlers, led by Japen Patel, the right-arm medium pacer, restricted Hong Kong to 125 for 9 — an innings in which Jamie Atkinson’s 23-ball 34 was the highest score. The USA batsmen overcame an early wobble in response, with Alex Amsterdam and Nicholas Standford putting on an unbroken 66-run partnership to seal victory at the Clontarf Cricket Club Ground on Saturday (July 18).

Hong Kong’s innings got off to a poor start with Anshuman Rath (3) falling in the third over with just six runs on board. But Irfan Ahmed was steady, putting on 21 and 27 with Nizakat Khan and Mark Chapman, before he was run out for a 31-ball 26. The wicket reduced Hong Kong to 54 for 3, but Chapman carried on, sealing up one end in a 33-run stand with Babar Hayat. 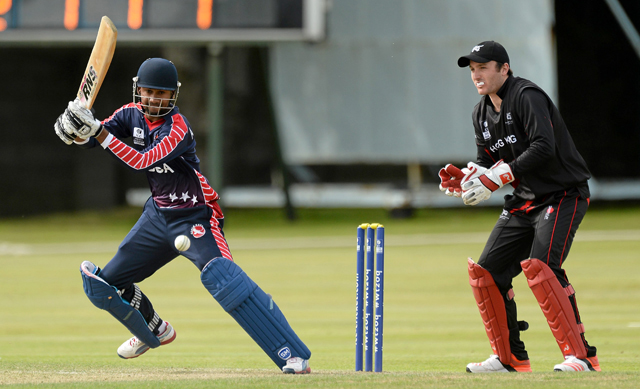 Alex Amsterdam bats during his unbeaten 43. Top, Nicholas Standford poses with the man-of-the-match award for knock of 40 not out, both batsmen ensure the win for USA. Picture credit: Oliver McVeigh / ICC / SPORTSFILE

Japen then had Chapman dismissed for a run-a-ball 22, and when Hayat fell a couple of overs later, Hong Kong was 98 for 5. It was then that Atkinson swung his bat around, hammering four fours a six, as wickets fell all around him. His late cameo helped add crucial runs to the total before he was run out off the last ball of the innings.

In response, USA didn’t have the greatest start, losing Akeem Dodson (8) and Japen (17) within five overs. Fahad Babar then sealed up one end as Amsterdam worked on the bowlers. The two had put on 28 for the third wicket when the partnership was broken, with Babar run out for a 26-ball 15.

However, Amsterdam was then joined by Standford, and thereafter, Hong Kong faced a downhill battle. Standford was particularly happy to swing his bat, eventually ending unbeaten on a 25-ball 40, including three fours and three sixes apiece. At the other end, Amsterdam’s unbeaten 39-ball 43, including four hits to the fence, proved the perfect foil.

USA eventually eased home with 11 balls remaining to stay in contention for the playoffs. The victory lifted it off the bottom of the table, with a total of four points, and it will need to beat a tough Papua New Guinea side to stand a chance to qualify.

Hong Kong, meanwhile, is currently placed fifth and will face the table toppers, Namibia, on Sunday in a bid to keep its tournament hopes alive.