USA Fails To Qualify Despite Win Over PNG

Victory over Papua New Guinea on Sunday (July 19) would have helped United States of America qualify for the next phase of the ICC World Twenty20 Qualifier 2015 had Hong Kong lost its last league match of the competition to Namibia.

But as it turned out, despite an 18-run win at Malahide in Dublin, USA crashed out of the tournament as Hong Kong completed a comprehensive 83-run rout of Namibia over at the neighboring Clontarf Cricket Club Ground.

The win could take USA only to fifth in the Group A table with six points – one less than PNG, Namibia and Hong Kong, all of whom, along with Ireland (8 points), are through to the next stage of the tournament. 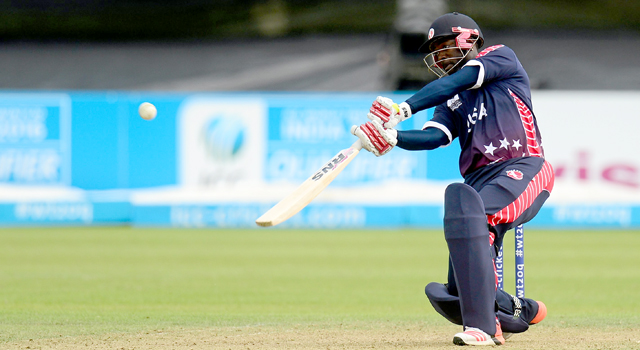 Nicholas Stanford during his knock of 40 not out. Photos: Piaras O Midheach / ICC / SPORTSFILE

Put in by Jack Vare, USA rode on a 48-ball opening partnership of 65 between Akeem Dodson and Fahad Babar to post 147 for 6 in 20 overs – its highest total in the tournament.

The duo resisted the new-ball attack of Norman Vanua and Assad Vala, which has been effective for PNG in almost all of its previous matches, and found the fence at regular intervals to consistently maintain a scoring rate of over six runs per over.

It was finally in the eighth over that Chad Soper, the right-arm medium pacer, had Babar caught by Vala after a 21-ball knock of 30. Dodson (38), partnered by Japen Patel, continued the assault for another three overs before being trapped leg before by Mahuru Dai, the legspinner.

That brought Patel and Alex Amsterdam together, with the score reading 79 for 2 in 10.5 overs. They took their side past the 100-run mark with a cautious 22-run stand for the third wicket.

Once Charles Amini, the legspinner, sent Patel and Amsterdam back — the wicket of Adil Bhatti, caught by Vala off his own bowling, was sandwiched between the two – USA slumped to 114 for 5. But a late cameo from Nicholas Stanford, who smashed 40 off 17 balls in a knock studded with five fours and a six, ensured a competitive total for his side.

PNG’s chase did not get off to the start it would have wished for, three wickets going down in 3.5 overs with just 21 runs on the board.

Muhammad Ghous, the captain, was the chief wrecker, supported by Naseer Jamali, the left-arm medium pacer who accounted for the first wicket of Tony Ura off the fifth ball of the innings.

Ghous then removed Lega Siaka and Vala in consecutive overs to send alarm bells ringing in the PNG camp. Dai (25 off 17), Kila Pala (21 off 17) and Amini (14 off 9) tried taking their side over the line – a result that could have put them on top of the points table and given them a direct qualification to the ICC World T20 2016 – but with wickets falling at regular intervals, PNG could only manage 129 for 9 in its 20 overs.

Scotland had qualified for the ICC World Twenty20 2016 to be held in India on Saturday by topping Group B, while Netherlands and Afghanistan proceeded to the play-offs. Oman, with a fourth-place finish, is through to the final Qualifier.