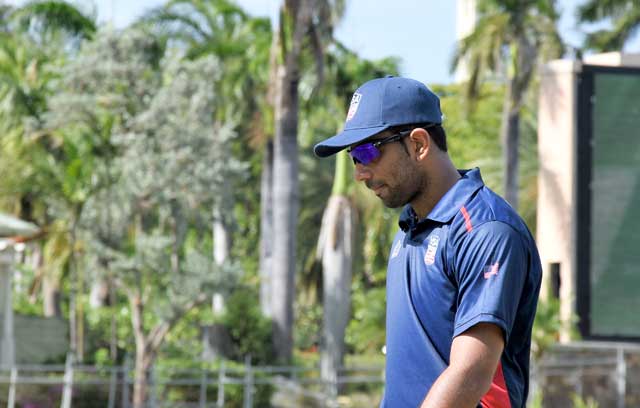 Saurabh Netravalkar was the most successful bowler finishing with 4 for 45.

Jamaica Scorpions went into this match looking for a victory over USA Cricket with the hope of it being enough to get them the final semi-final spot up for grabs.

Scorpions won the toss and elected to bat first. Captain Chadwick Walton was the first to fall for 13.

Trevon Griffith soldiered on, together with Steven Taylor the pair posted 88 runs when Taylor fell for 40. Griffith eventually departed for a well-played 80.

Alwyn Williams and Fabian Allen then partnered for 56 runs before Williams was out for 20.

Scorpions reached 259/8 from their 50 overs. Saurabh Netravalkar was the best USA bowler, taking 4/45.

Jamaica had the USA innings in a bother early on as they were 2/32 in the 25th over. A partnership of 54 between USA captain Ibrahim Khaleel and Jaskaran Malhotra rescued their innings.

Khaleel fell for 29. Malhotra continued the USA’s resistance, but he eventually fell for a hard-fought 70.

The rest of USA Cricket couldn’t not take their team to the target. USA Cricket reached 179/9 from their 50 overs. Christopher Lamont has the best bowling figures for Jamaica with 2/17.

Trevon Griffith was Man of the Match.

Kent Secures Semi-Final Berth Despite Scorpions Victory
Kent CCC secured the last semi-final spot available in the Super50 Cup 2018 when they defeated the Leeward Islands Hurricanes by 23 runs according to the Duckworth Lewis method in a rain-affected match at the Coolidge Cricket Ground in Antigua.

The victory also meant that despite a victory in the earlier match by the Jamaica Scorpions, Kent CCC finished ahead on points, thereby earning qualification.

Kent won the toss and elected to bat first. Openers Daniel Bell-Drummond and Zak Crawley gave the Spitfires solid start of 96 runs before Crawley fell for 43.

Bell-Drummond was then joined by Sean Dickson and they continued the run-fest as they added 46 together, which saw Bell-Drummond reach another half-century in the tournament. Bell-Drummond fell for 66.

Dickson and Rouse added 11 together. The partnership that anchored the Spitfire’s middle order saw Alex Blake and Sean Dickson put on 72 runs together.

Kent CCC eventually reached 266/9 from 50 overs. Orlando Peters playing in his first match of the tournament had the best Hurricanes bowling figures of 5/49.

Leeward Islands Hurricanes got the dream start of their reply. Hodge and Keacy Carty went fearlessly at the Kent bowlers, posting 122 runs together.

The Hurricanes openers both achieved half-centuries, Hodge made 62 and Carty 69, both men losing their wickets 4 overs apart.

Rain had the biggest role in this match as it fell in several short periods. The rest of the Leewards batsmen never got firing and partnerships were difficult to build due to the break in momentum from the rain.

When play finally resumed, the Duckworth Lewis method was enforced with the Hurricanes needing 40 runs from 1 over.

Adam Riley was Man of the Match.