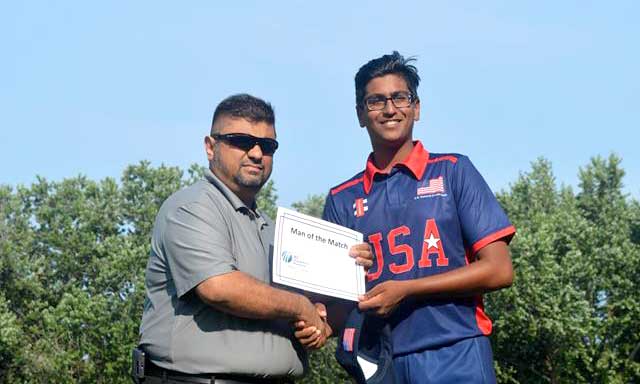 Sahil Patel collects the man-of-the-match award for taking 5 for 20 from 10 overs. Photo courtesy of Edward Norfolk

By Ravi Madholall in Toronto
USA once again stamped their authorities in this International Cricket Council (ICC) limited-over Qualifier tournament after demolishing hapless Bermuda by 118 runs on Friday at Toronto Cricket, Skating and Curling Club ground.

With the other competing team Canada also lost to USA, the race for the championship continues when Canada face off with win less Bermuda Saturday at Maple Leaf venue and then the final encounter against USA on Sunday back at the Toronto facility.

To stay alive and be the North American side to participate at the 2018 ICC Under-19 World Cup next January in New Zealand, the hosts need to beat Bermuda by a huge margin and then get the better of USA.

Friday, the Bermudians were capitulated under the canny off-spinner Sahil Patel who claimed a five-wicket haul to inspire USA to the resounding victory on a sun-drenched day.

Patel operated from the Southern-end of the ground bowled with great control to finish with 5-20 from ten menacing overs on a receptive pitch.

He was admirably supported by left-spinner Mohak Buch who grabbed two wickets for 20 runs from 8.5 overs as the Bermuda boys were dismissed for 102 in the 37th over after USA tallying up a formidable 220 all out off the 50-overs.

Bermuda began their reply losing Jabari Darell (12) edging a regulation catch to Patel at first slip off the lively fast-bowler Keshav Pabbisetty, who took 1-23 from six overs before he left the field with a side-strain injury.

Bermuda were looking comfortable picking up singles as skipper Nzari Paytner (17) and Marcus Scotland (12) gathered some momentum with an encouraging 34-run second-wicket partnership but once they were separated by player-of-the-match Patel, the innings steadily and ultimately declined.

No other batsman in the middle was able to manipulate the bounce and turn Patel created until Cameron Jeffers, who batted at number 10 delayed the inevitability having scored a fighting 12.

Earlier, USA won the toss and immediately opted to bat and they got off nicely by achieving a 29-run solid opening stand between the diminutive left-hander Harish Easwaraiah and Mohak Buch (09).

Skipper Arun Patel struggled and only found himself back in the pavilion without making a contribution while Richard Ramrattan did not stay to long departing for 13 via the LBW route to medium pacer Darell.

Vivek Narayan played several attractive shots compiling a well-played 34 while Easwaraiah gone back for 25. Narayan and Gaurav Patanker continued with the rehabilitation work and they featured in an impressive 54-run fifth-wicket stand.

Narayan was technical from inception tucking away four fours in his 54-ball occupation at the crease. He was dismissed for an even half-century bowled comprehensively by spinner Jeffers seemingly lost his profound concentration.

All-rounder Karthik Gattepalli and Sahil Patel, who also displayed his all-round capability, chipped in with 24 and 22 respectively towards the end.

Meanwhile, USA’s Sahil Patel and two Bermudian players Ras Solomon Burrows and Dalin Richardson were summoned by the umpires and match-referee for their “unacceptable behavior” on the field at the conclusion of USA innings.

These players were involved by a brief physical altercation before the on-field umpires intervened and stopped them immediately.

Coach of Bermuda team Clay Smith at the completion of the game acknowledged that his boys were just disappointed again and did not match their skills with USA on Friday.

He feels the team is talented enough to compete but they were outplayed in every department for three successive matches.
“I think the players were disappointing again; we came here with some senior players and players who are exposed to high level cricket and to see this kind of performance is certainly disheartening,” Smith who appeared in 12 one-day internationals for Bermuda including the ICC 50-over World Cup (2007) in the West Indies, stated.

Pubudu Dassanayake, the coach of USA team, mentioned his side will remain with the primary focus to win all four games in the competition. “Obviously, was a great win today (Friday), but our main goal is to win every game here in Canada; the guys are focused on that but a win is a win and we are happy with the progress,” Dassanayake, who represented Sri Lanka in test cricket and also played for Canada at highest level, related.