USA Scratches To Compete With the Stars 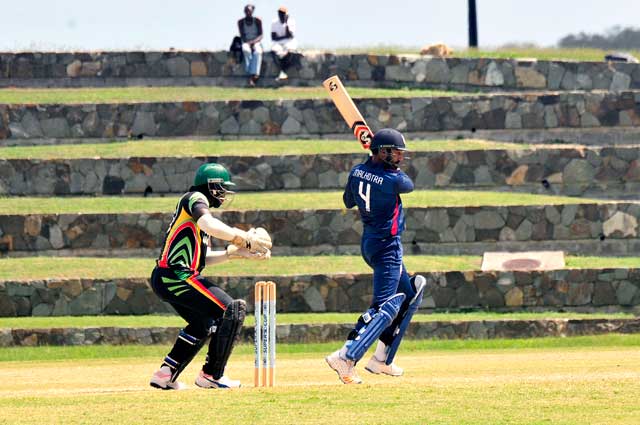 Jaskaran Malhotra bats during his knock of 80. Photos by John Aaron

Sir Vivian Richards Stadium, North Sound, Antigua – Coming off an emphatic and morale-boosting victory over the Leeward Islands Hurricanes, the USA men’s team scratched and clawed to compete with the likes of Shivnarine Chanderpaul, Devendra Bishoo, Veerasammy Permaul, Leon Johnson, Christopher Barnwell and others on the Guyana Jaguars squad who have all strutted on the international Test and ODi levels. It was the Group B second round of matches in the 2018 Cricket West Indies Super 50 Cup tournament in Antigua, West Indies.

Winning the toss, the Guyana Jaguars led by Leon Johnson asked USA to bat on a wicket that was very soft, the result of overnight rain and accumulated moisture. At the 1.5 over mark the match was abruptly halted by the umpires for what appeared to be even softer patches on the track, a result of some seepage when the grounds crew were removing the covers. A heavy roller made several passes with the match being held up for approximately 90 minutes, reducing the number of overs from 50 to 44. Did the delay in the restart of the match have an effect on the opening pair of Sunny Sohal and Jaskaran Malhotra, or were the batsmen simply nervous against such an opponent as the Guyana Jaguars? The Jaguars had previously defeated the USA in the first round of the tournament. 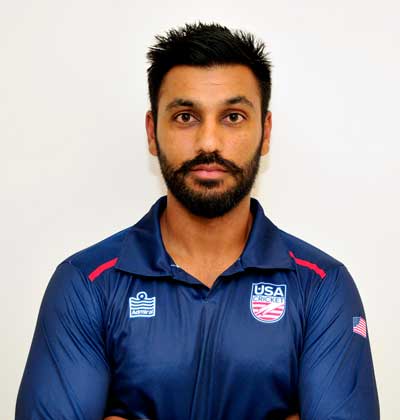 If the USA pair was nervous it did not show as Sohal and Malhotra sought to get on top of the Jaguars’ bowling. In this encounter it was the taller of the two batsmen Malhotra who was striding to not repeat his first encounter with the Guyanese bowlers when he failed to trouble the scorers. On the other hand Sohal with an even half-century in the previous match against the Leeward Islands Hurricanes was scratching to stay in-form. However, it was Malhotra who scratched and clawed his way out of being bogged down by the Jaguars bowlers Kemo Paul, Sherfane Rutherford and Christopher Barnwell. Sunny Sohal was the first to exit bowled by Rutherford for a single after failing to eek out more runs off 13 dot balls.

The Jaguars began to penetrate with resounding success as the next three wickets fell – Xavier Marshall, 19, Mrunal Patel and Roy Silva saw animated effigies of themselves crawling across the big screen, head bowed and bat in hand, representing the ducks they had contributed. Following the departure of Sunny Sohal so early in the inning, it was left up to Malhotra and Marshall to build a partnership, but 39 runs and 15 overs later, the latter was bowled going for an impatient slog against Christopher Barnwell. From 40 for 2, the USA slid to 56 for 5 three overs later.

Having established that the team has the bowling capacity to compete at the level now on stage, the USA needed to bat in pairs, consolidating their performance at the middle. Malhotra needed someone to hang in with him and establish a partnership of 50 or more, to peg the Guyana Jaguars bowlers back a bit. However, despite having such a fine cadre of bowlers, it was the failure of the USA batsmen to reach deep down for quality performances against the Guyana bowlers. The team needs to fire on more than one cylinder at a time. If Sohal had repeated his performance from the Hurricanes encounter, and along with Malhotra’s performance in the Guyana match, imagine what an opening partnership the USA would have had.

Having failed to post a respectable opening partnership against the Jaguars, the USA batsmen had other opportunities to partner with Malhotra, long before he was gone, having posted 80 and caught off the bowling of Devendra Bishoo in the penultimate over. Malhotra’s 80 was made off of 116 deliveries and included 1×6 and 6x4s. Despite showing a lapse of concentration and focus on two separate occasions when he almost ran out two of his diving teammates, the batsman was determined not to give up his wicket. He was short of batting out the allocated 44 hours by just 1.2 overs and his team by five balls. Along the way Adil Bhatti contributed 19 (1×6) and the other batsmen posted between 1 not out and 9 runs each.

Batting first on a strip that was less than prepared did not help the USA batsmen, however, such is cricket and the necessary mental toughness and intestinal fortitude are required, to maximize performances. 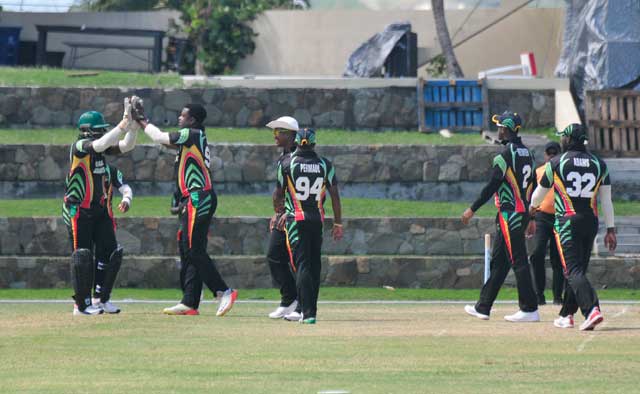 The Guyana Jaguars in response was looking to make light work of the USA, and in a methodical way, so as to get the extra point by bowling the team out in a hurry. Opening with Shimron Hetmyer and Chanderpaul Hemraj. Guyana was soon shocked as USA’s skipper Ibrahim Khaleel caught Hetmyer off Saurabh Netravalkar in just the second over for five, with Guyana 5 for 1. The celebration was brief however, as Mr. Perennial himself Shivnarine Chanderpaul arrived at the middle to join Chanderpaul Hemraj. The duo would partner for another 18 overs, before Timil Patel held on to a catch off the bowling of Roy Silva, to dismiss Shivnarine Chanderpaul for a well-made 39.

Chanderpaul’s at bat was one of controlled aggression and ease, as the veteran put on a batting display that was choreographed to achieve the objective of winning the match without any fuss. He took the quick singles and twos, keeping pace with the required run rate and lofting the bowlers when necessary. The batsman often criticized for being too slow at the wicket gets the job done with remarkable ease and the USA players hopefully learned from the lesson in the middle given by the 43-year-old former Test player.

From there on, it was not a matter of whether the Jaguars would win the match, but simply when. In the meanwhile, the USA remained competitive and encouraged each other vociferously. Substitute Prashanth Nair was the cheerleader with “Come on lads, we can do this.” His battle cry was heard across the 108 square miles of Antigua and 25 miles north to neighboring Barbuda. However, it would take a miracle for the USA to scratch a “W” out of this one, not with the batting depth of the Jaguars. It was left up to USA skipper Ibrahim Khaleel to use his bowlers in a manner that would restrict any major embarrassment and to afford them the necessary experience of bowling to players with the pedigree of the Guyana Jaguars.

Chanderpaul Hemraj who was batting with a tremendous amount of confidence was the next batsman to depart, but not after he had contributed 64 (4x6s, 5x4s) off 59 balls. Roy Silver caught Hemraj off the bowling of Timil Patel. Guyana Jaguars 114 for 3 in the 25 overs. The stocky Christopher Barnwell joined the party and after adjusting to the Guyana bowlers exploded on Timil Patel for a maximum over deep mid-wicket, and then another one off Mr. Patel two overs later over long-on. It was Barnwell’s third maximum after grabbing 4 for 35 with the ball. Barnwell’s last six was the signature on the bottom line. Guyana Jaguars winning by seven wickets at the 30.1 overs mark with a score of 150 for the loss of three wickets. 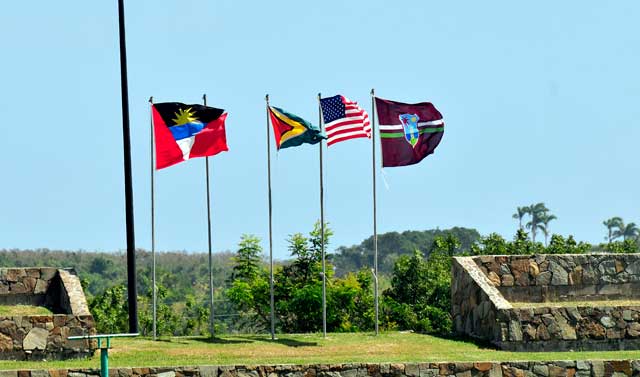 The Guyana Jaguars wickets fell at 5, 94 and 114. Bowling for the USA: Timil Patel, Roy Silva and Saurabh Netravalkar each secured a scalp for 27, 35 and 52 runs respectively. Elmore Hutchinson was unlucky not to get any wickets with a very economical spell of 6-1-7-0. The Jaguars inning contained six maximums and 11 boundaries, compared to the USA’s solitary six and seven boundaries. At one time USA had faced 22 dot balls, a result of some very fine bowling from the Jaguars and a timid approach at batting by the USA. The USA sought to conserve wickets and hopefully explode in the latter overs, however, there was hardly a let up in the pressure from the Jaguars’ bowlers.

Take-aways: Beaten for the second time in the tournament by the Guyana Jaguars, Team USA should realize that batting partnerships matter more than anything else in the need to post as much runs on the board as possible, and against such an array of bowlers in the Jaguars camp. In their first encounter, USA enjoyed an eighth-wicket partnership of 89 between Mrunal Patel (43 off 87) and Elmore Hutchinson (45 off 57). That final tally of 188 for 8 was more respectable than the 150 in this match.

The at bat contribution of 51 off 83 balls by Xavier Marshall in the first USA vs. Guyana match would have been very useful in the return encounter, and that’s why the USA need to have more that one player put their heads down and bat well, if they are to give themselves a fighting chance at this level of competition.

With several in the stands rooting for underdog USA, it appears as though the USA is quickly making believers out of some very skeptical fans around the world, so now is the time to step up and perform to sustain that fan support. It was USA’s sixth loss in seven outings, placing them at the bottom of Group B with just five points. However, it is hoped that the players continue to grow as their participation in the tournament comes to an end this week. The squad is a cohesive and supportive one and we can only hope that from this squad emerges the future core of Team USA.