USA Wins Thriller While Canada Got Beaten In Warm-up Games

Ireland’s clash against United Arab Emirates was abandoned without a ball bowled due to rain in Belfast, but elsewhere, there were wins for Afghanistan, United States of America and the Western Districts Cricket Union during the first round of warm-up matches for the ICC World Twenty20 Qualifier 2015 on Monday (July 6). 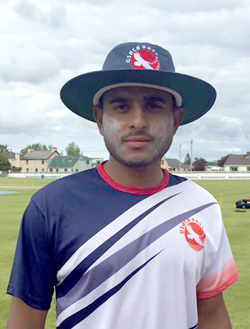 Adil Bhatti contributed 20 runs in a partnership with Shiva Vashishat for the fifth wicket.

Afghanistan was dominant in its eight-wicket win over Jersey, who opted to bat but was bowled out for 46 in 10.2 overs at Myreside in Edinburgh. Mohammed Nabi, the offspinner and former captain, and Mirwais Ashraf, the medium pacer, grabbed three wickets apiece to restrict Jersey, for whom Peter Gough and Cornelis Bodenstein top-scored with 12 runs each.

Then, despite losing Mohammad Shehzad (9) and Asghar Stanikzai (4) within three overs – Ben Kynman and Anthony Kay bagging the wickets respectively – Afghanistan completed the chase in 7.3 overs, with Nawroz Mangal (16 not out) and Samiullah Shenwari (14 not out) taking it through.

Meanwhile, over in Bready, USA beat North West Warriors in a keenly-fought thriller. The start of the match was delayed by rain, reducing it to a 15-over-a-side affair, and when it began, the Warriors side was reduced to 29 for 2 after being put in to bat. Hammad Shahid dismissed both openers – David Barr (17) and David Rankin (10) – off successive balls. However, Oraine Williams steadied the innings, putting on 34 with Marco Marais for the third wicket, and then 27 with Ryan Hunter for the fourth. Having scored a 35-ball 47, Oraine Williams fell to the medium-pace of Japen Patel with the score 102 for 5. Warriors eventually posted 119 in its 15 overs.

In its chase, USA got off to a good start, with Fahad Babar and Akeem Dodson, the openers, putting on a fairly quick 45 within six overs. However, Babar was then bowled by Ross Allen’s left-arm spin for a 19-ball 27, and USA was reduced to 73 for 4 in a flash, with Dodson (15), Nicholas Standford (3) and Japen (6) all falling in quick succession. However, Adil Bhatti provided Shiva Vashishat company, and the two added 46 for the fifth wicket to propel the chase. Bhatti fell for a 16-ball 20 when the scores were level, but victory was sealed soon after, with Vashishat ending unbeaten on a run-a-ball 30.

Elsewhere in Edinburgh, at the Grange Cricket Club Ground, Western Districts Cricket Union beat Canada by eight wickets, thanks to a half-century by Brad Williams after Sudesh Fernando’s 4 for 25 had helped bowl Canada out for 146.

Fred Klaassen had dismissed Canada’s openers in the very first over to reduce it to 6 for 2 after it had chosen to bat. However, a 102-run stand for the third wicket, between Hiral Patel and Nitish Kumar helped it recover and pull ahead. Kumar was particularly aggressive, scoring a 38-ball 68, including 10 fours and a six, before he was dismissed by Keith Dabengwa. The wicket gave the bowlers momentum – Patel soon fell to Fernando for a 51-ball 44 – and Canada was all out for 146.

Canada needed early wickets, but the Western Districts Cricket Union openers were solid. Qasim Sheikh held up one end while Niel Bredenkamp attacked at the other, putting on 55 for the opening wicket before Bredenkamp fell to Jeremy Gordon for a 25-ball 44. Williams came in and put on 77 for the second wicket with Sheikh – who fell to Junaid Siddiqui late on – and saw the chase through, ending with a 38-ball 53.