A women’s development camp will be staged in Philadelphia from September 8 – 11, 2016. 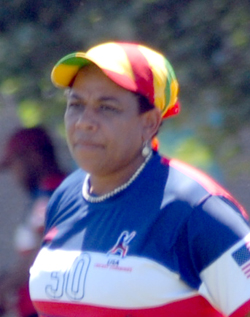 Joan Alexandra-Serrano one of the female selector. Photo by Shiek Mohamed

The camp is an opportunity for some of the USA’s best female talent to work alongside developing players to drive improvement across the group over the 3 day event.

The event will involve training, internal matches and also competitive matches against a women’s touring team from the Marylebone Cricket Club, England. Matches and training will be held at Evansburg Cricket Field, Merion Cricket Club and Haverford College.

As per the application process and note to the community in June a USA Women’s Selection Panel has been formed to select the players to attend this development camp. USA Chairman of Selectors Ricardo Powell will also chair the women’s panel, he is joined by experienced USA selector Barney Jones and three women with vast experience in cricket who are all very passionate about driving the female game forward across the USA. Patricia Whittaker is a former Barbados and West Indies Captain who now lives in New York. Julie Abbott is a former English county and international player who lives in Kansas City, while Joan Alexandra-Serrano, residing in Pennsylvania, has represented Grenada, West Indies and USA as a player.

The panel will announce the squad of players to attend this development camp early next week.