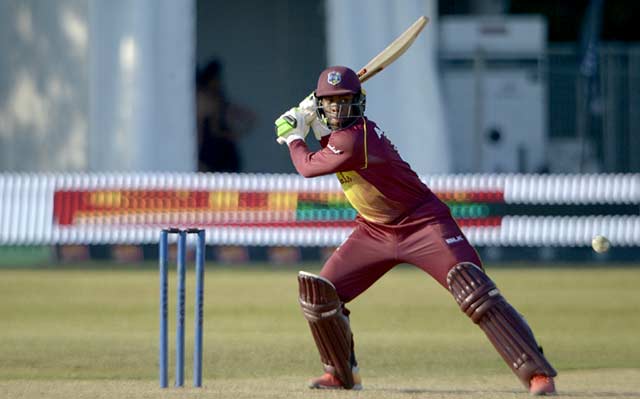 Fabian Allen during his knock of 75. Photo courtesy of http://www.gt20.ca/

By Ravi Madholall in Toronto
Cricket West Indies “B” side chalked up two victories so far in the continuation of the six-team Global T20 Canada tournament at Maple Leaf ground, King City, Toronto.

On Sunday, Jamaican Fabien Allen cracked a belligerent, unbeaten 75 to lead his team to a fascinating three-wicket victory over Edmonton Royals. The “B” combination was replying to Royals’ competitive 155 all out in 19.4 overs, reached 159-7 off 18 overs. They were wobbling at 66-6 before the right-handed Allen began his assault hitting eight towering sixes and four fours from just 30 deliveries.

The 23-year-old Allen, who has appeared in 12 first-class matches for his native country to date, batted at number eight. Nicolas Pooran and Brandon King having scored attractive fifties in the first match against Montreal Tigers, failed to make an impression on this occasion making only 13 and 5 respectively.

Skipper Anthony Bramble (01) and Shamar Springer (15) also fell in quick succession along with king and Pooran but Allen counterattacked brilliantly despite a three-wicket haul from left-arm orthodox spinner Hassan Khan.

Earlier, Royals took first strike at the insertion of West Indies “B” but began things quite precariously losing Luke Rochie (09) and Andre Fletcher (04) quickly while wickets continued to fall steadily until Farhaan Behardien batted with some amount of purpose to score a responsible 29.

He was nicely backed up by O’Brien, who played with great aggression by spanking five sixes and three fours in his 17-ball 49.

Enthusiastic left-arm seamer Obed McCoy delivered well on a responsive pitch by claiming 4-22 from 3.4 overs while Kavern Hodge and Rutherford collected two wickets each to be in the wicket column as well.

In the initial game, West Indies “B” beat Montreal Tigers by two wickets also at the same venue in sweltering conditions the previous day. Tigers, who suffered two consecutive defeats now, piled up a challenging 184-9 at the expiration of the 20-overs while the Caribbean boys replied with 187-8 with five balls remaining.

Sikandar Raza top-scored for the Tigers with 48 while Sunil Narine chipped in with 28 and 26 from Moises Henriques as McCoy once again taking three wickets for 31 runs from four decent overs. He was ably supported by Jerimiah Louis and Khary Piere; both snatching two wickets.

When West Indies “B” batted, they were some struggles early until Pooran and King linked up and participated in a handsome 93-run four-wicket stand. Pooran went for 58 and King 56. Springer also showed excellent form by thumping three sixes in an unbeaten 26. Captain Lasith Malinga took two wickets for 33 runs and Peter Siddle, another international fast-bowler snaring two scalps.

In the other two completed fixtures over the weekend, on Saturday, Edmonton Royals beat Toronto Nationals by a comprehensive eight-wicket margin and the following day, Vancouver Knights overwhelmed Winnipeg Hawks by six wickets.

The action is set to continue on Monday with another double-header at the same facility. From 11:00hrs, Toronto Nationals will tackle Winnipeg Hawks and then at 16:00hrs, Montreal Tigers colliding with Vancouver Knights. The final is expected to take place on July 15.