By Dervon Wallace | Scorecard
As American across the world paused to remember those who passed away in the terror attack of the World Trade Center 15 years ago, spectators present at Idlewild Park in Queens New York, were treated to some masterpiece of cricket display by Westbury Cricket Club on route to their tenth title in the New York Metropolitan Cricket League Clement “Busta” Lawrence Premier League, toppling arch rival Villagers Pacesetters Social Athletic Club in what turned out to be a one-sided affair.

In slightly overcast condition Westbury won the coin toss and asked Villagers to take first strike. Like most, if not all sporting events around the country, both set of players and official stood pitch side and paused for a moment of silent in memory of those who lost their lives. It was now time for the highly anticipated match up; to do battle for the Pacesetters was the inform duo of Sashane Anderson and Glen Hall. It was the latter who started to take the fight to Westbury, taking a liking to young fast bowler Juanoy Drysdale. 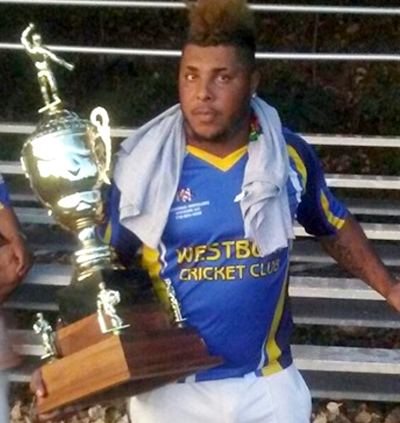 Coleman with trophy after his 110, Coleman scored 1047 runs overall and is the first batsman to score over 1000 runs in a single season. Pictured above, Westbury players before the game.

The partnership got to 41 from 7.3 overs, before Anderson 15 (28balls 1×4 1×6) after hitting a Dennison Thomas longhop over mid-wicket for a maximum, a ball that took approximately 8 minutes to be retrieve, and the very next ball Anderson tried to repeat the shot but found the waiting hands of Drysdale who was posted there after the first shot. Walked to the crease was the dangerous, West Indies test batsman, Xavier Marshall, the talented Marshall continued to show that he’s steps ahead, delighting the crowed with a couple lofted blows, adding 45 from 6 overs with Hall. With the score on 86, Hall 44 (37balls 5×4 2×6) fell to a sharp catch at the solitary slip position by Wayne Cuff to give Thomas his second wicket.

Marshall was next to go with the score on 106 in the 20th over for 35 (35balls 1×4 3×6) to a seemingly impossible catch by veteran Deron Ferguson, running around plucking the ball out of thin air when it seems destine for 6 off the bowling of Joseph Brown.   The delight was evident by Ferguson and the entire Westbury players who manage to catch up with Ferguson after he completed a 200 meters sprint around the ground, a sprint that would make Usain Bolt proud.

It was soon 114 for 4 when a circumspect looking Dennis Evans 12 (33balls) push tentatively to a Clinton Lewis delivery that caught him on the crease plumb in front presenting one of the easiest decision, test most cap umpire Steve Bucknor would’ve had to made, Bucknor in his customary fashion waited then raised the dreaded finger. Rashard Marshall and Richard Staple went about rebuilding the innings, before Staple 26 (34balls 1×4 2×6) lost his middle stump to the impressive Brown with the score at 163 for 5. Veteran Melroy Kingston came and went and it would be down to Marshall to get Villagers to a respectable target. 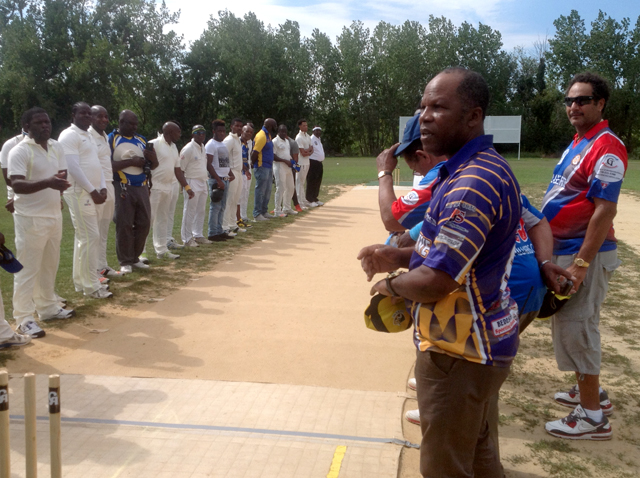 Both teams gather pitch side for a minute silent in memory of those who lost their lives in the terror attack on the World Trade Center.

Needing 230 runs at an average of 5.75 for their tenth lied on the converted trophy, Westbury got to their target with 9.5 overs to spare, thanks to the exploit of one Mr. Tristan Coleman and Bereston Reid.  The pair batted for 25.3 overs, sharing in an opening stand worth 199 runs the highest on record in MCL finals, surpassing the 196 fourth wicket stands between Rashard Marshall and Steve Massiah for Villagers against Westbury in the 2014 final.

The well-paced partnership by Coleman and Reid was built on patience, confident stroke play and good running between the wickets. Both batsmen seemed comfortable against the Villagers bowlers going about their work, chipping away at the bowling with the persistence of the Colorado River gnawing away at the Grand Canyon. When Coleman got to 63, the former Cross Keys High School student who represented the West Indies under-19 in the 2014 Youth World Cup achieved a fleet that has never been reached in the history of the competition reaching 1000 runs for the season, and good sportsmanship was shown by the Villagers players who went over to congratulate the batting machine. 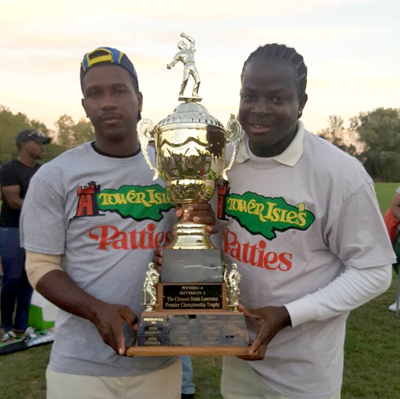 The partnership was broken when Reid 76 (76balls 6×4 3×6) held out to Hall, who run some 20 yards off the long-off boundary to take a well-judged catch.  Coleman then brought up his fifth hundred  of the season and acknowledged the applauds from team mates and spectators, one Westbury member couldn’t hold his emotion and ran out to the middle to congratulate the hard hitting batsman, only to be driven off by captain and Club President Bartley who could be seen hugging his charge congratulating him.

With the fat lady getting ready to make her way onstage, Coleman seemingly in a hurry to hear her vocals tried for another maximum and held out to Adams on the long-off boundary for a majestic 110 (83balls 9×4 7×6). He walked off to a standing ovation and was greeted by his teammates in the dugout. Fittingly the winning run was scored by Bartley who finish unbeaten on 9 and Cuff on 8. Anderson and Brown finish with a wicket apiece.

At the presentation, Adams congratulated Westbury and state that his team was comprehensively out played in all departments. Bartley on the other hand said he wants to donate the victory to the entire Westbury members and thank the senior members who stood by him throughout his career and helped him to develop as a better person.

Coleman was named man of the match and received a bat from President Cliff Roye. 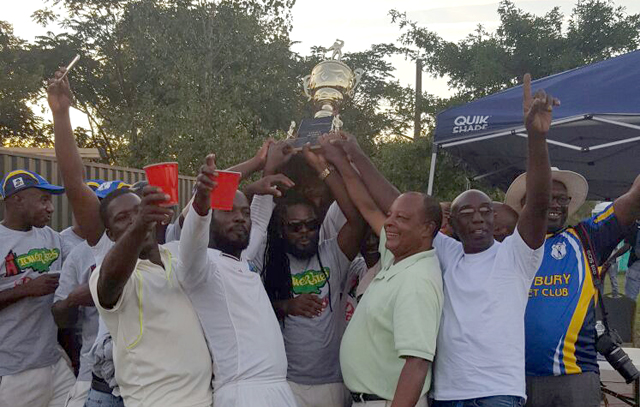