By Ravi Madholall in Toronto
Winnipeg Hawks tamed Montreal Tigers by a convincing 46-run win on Friday at Maple Leaf venue, King City, Toronto in the second round of the 2018 inaugural Global T20 Canada competition. 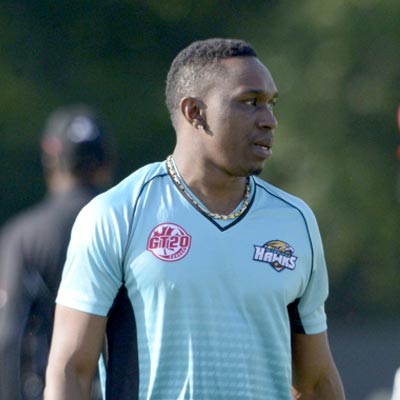 Led by versatile all-rounder Dwayne Bravo, Winnipeg Hawks batted first at the invitation of Montreal Tigers and they were able to rattle up a sufficient 203-4 from the allocation of 20-overs. Tigers, in response, could not roar steadily and were dismissed for 157 in the penultimate over.

The ebullient Bravo also stared with the ball to help restrict the oppositions by snaring three wickets for 24 runs from three medium-pace overs while Canada’s player and leg-spinner Junaid Siddique claimed three wickets but conceded 35 runs from 3.5 overs. USA Talented fast-bowler Ali Khan took two for 18 runs from his impressive four-over spell to be supportive.

Both batsmen showed good aggression but felt in quick succession. Henriques made 23 while Narine contributed 20. Ashley Nurse played some attractive shots but was brilliantly caught by David Warner at long-on to canny leg-spinner Siddique. George Worker also made 26 while Rayan Pathan hit a cameo 26.

However, a partnership of 69 between opener Lendly Simmons and Ben McDermott provided great resistance on a deceptive surface in glorious sunshine.

Simmons, who was dropped on 15 went on to score 36 while McDermott impressed with a top-score of 68 laced with seven fours and a six from 46 deliveries before he was taken off medium-pacer Kevin Cooper.

Darren Bravo, the elegant Trinidad and Tobago batsman, began his innings quite slowly but gradually got into an aggressive mode having thumped five gigantic sixes around the sword.

He made 54 and associated in few valuable partnerships during his stay in the middle. South African David Miller, a world-class T20 batsman, once again in phenomenal form spanking several delightful shots with great confidence to contribute 35.

Malinga captured two wickets for 19 runs from his four tidy overs. At the presentation ceremony just after the game, McDermott was given the player-of-the-match award for his innings. Skipper Malinga stated his team will bounced back from the defeat while victorious captain Bravo mentioned the guys were truly remarkable in the first match.

The tournament continues on Saturday with two matches at the same facility. At 11:00hrs, Toronto Nationals, who won the opener on Thursday, will face off with Edmonton Royals and at 16:00hrs, Montreal Tigers will oppose Cricket West Indies “B” team.