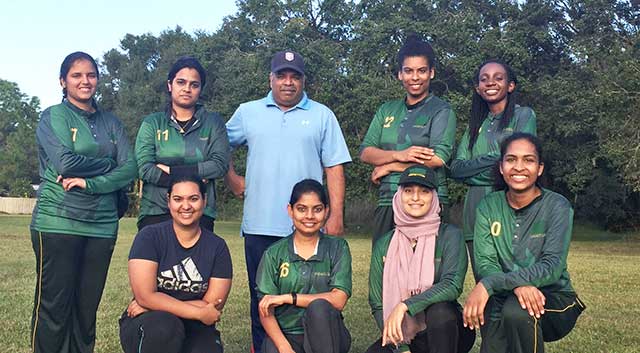 Coach Jatin Patel with members of the Bulls team.

The team initially got some hands-on training from the USF men’s team at the same campus, and from there they built a competitive team and have played a few games every year since 2015.

The Current USF Women’s cricket team started with Ankita Ajith Deshpande, Delisa Harry, and Vasudha Prithipaul – who came together to form a women’s cricket team on the USF campus with the support of Roshni Chasmawala and the USF cricket club. Currently the women’s team boasts true diversity with ladies from seven nations – Guyana, India, Nigeria, Mauritius, Egypt, Ecuador, and Italy.

Ankita Ajith, the captain is the most experienced player and has been playing cricket for six years, including captaining the U-19 State-level cricket team in India to victory in two matches at the State level. Ankita loves cricket and is pursuing a desire to play for the USA Women’s cricket team.

USF Women’s Cricket Vision – aims to promote cricket among the student population on the college campus. They are striving to develop a team of multi-ethnic, multi-racial women from all backgrounds and walks of life. In the long run, they hope to create long lasting friendships within the growing community of women that transcends their time at the university.

USF women’s cricket is growing and the plan is to participate in as many matches and tournaments in the future as possible, as the ladies develop their competitive game spirit and related skills. USF Women Cricket Club is highly appreciative of the opportunities for professional cricket training to develop the skills needed to play at the highest levels of the sport. They would love to have Jatin Patel, a recognized American Cricket Federation (ACF) cricket coach, back to coach and take them to another level.

A unique women-only cricket training and coaching camp sponsored by the ACF was held during the Finals of the inaugural USF Bulls T20 Inter-college/university championship. Six universities participated in the training camp.

It’s just amazing that the USF women’s team is truly a universal team with the diversity as players from different parts of the world, including a few non-cricket playing countries, all working together to become a very competitive team through regular practice and training. 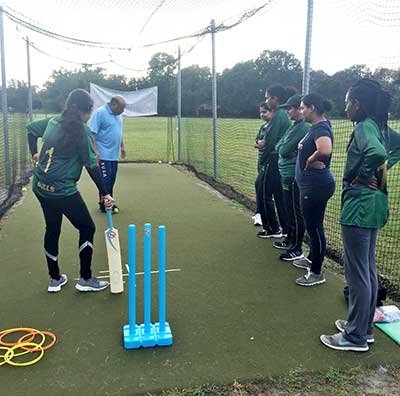 One of the many net session.

Jatin Patel said, “I had a great time during my vacation trip, and to work with the team at the day camp. I am truly excited to see the level of interest and commitment to learning the game, along with the willingness to teach cricket to others. USF women’s team adopted the successful idea from USA Soccer where many young active players become match referees to learn the game’s rules and start coaching to learn more about the game, which helps them to become good smart players for their own performance,” adding, “Watch out for the ladies from the USF camp as they have a huge desire to do well in women’s cricket. I will not be surprised if one or more of them go the extra mile to become great cricket coaches down the road. In the short term, I am expecting the USF team to compete at the inter-college/university or other women’s cricket competitions in the USA.”

It was a great opportunity to have coaching from Jatin Patel for our women’s cricket team where he executed basic cricket drills which were effective and useful for the entire team. I would like to thank Jatin Patel for sharing his knowledge about the game. We had a very productive time during the training with Coach Patel.” – Ankita Deshpande, Captain USF women’s cricket.

“The ladies and I were thankful to have Coach Jatin Patel in our midst! We learned so much. Not only did he expand our understanding and appreciation for the game, but he also gave practical advice we can use to improve our game. We hope to have many more sessions in the future as we work together to develop women’s cricket in the USA!” – Delisa Harry

“The cricket training camp was very helpful in teaching us the basic skills needed to play cricket. Many of the drills that Jatin Patel taught us will help build up our knowledge base, technique, and skill as cricket players. We are very grateful to Mr. Patel for teaching us the fundamentals of cricket.” – Ufuoma

“It was a privilege to have Coach Jatin Patel help USF women’s cricket with the fundamentals of the game. He demonstrated many practical setups and gifted us with a kit. Thank you, Mr. Patel. We appreciated your time and efforts in improving women’s cricket.” – De Sica Harry

ABOUT ACF COACHING PROGRAM:
The ACF Coach Certification Program is now established in 24 States, with Level 2 and Level 1 coaches, as well as Level 1 Instructors. The program was launched in May 2014 for Level 1 coaches and June 2015 for Level 2 coaches. As of November 21, 2018, there were 172 Level 2 coaches and 342 Level 1 coach trained and certified through ACF Coach Certification programs. The numbers exclude – School Physical Education teachers and future coaches at the six colleges and universities.