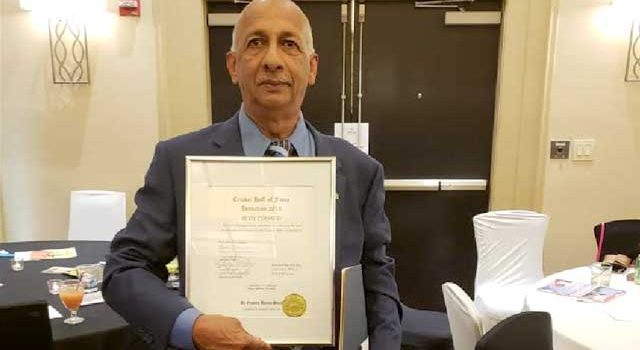 By Sham Ali
Rudy Persaud has been inducted into the United States of America Cricket Hall of Fame last Saturday, Oct. 6, at a gala event held at the Hotel Hilton in Queens, New York. It is a deserved recognition for a man who has been a symbolism of hard work and dedication to cricket, and someone who never seek recognition or praise. A quiet, unassuming individual, Rudy Persaud developed his love for cricket on the streets in a small village named Enmore on the East Coast of Demerara where he, like so many others, whose innocence in playing cricket eventually became a lifelong obsession with the hope of one day idolizing their heroes at the highest level.

He attended Enmore Government school where he played cricket merely as a pastime activity. While many of his peers excelled on the playing field, Rudy, as he is referred to by his peers, was always prompt at the matches, and was committed to any task that was given to him on the day, and on occasions, he remained unfazed if there wasn’t a spot for him on the team. But Rudy knew his compass well, and always had a good measure of his abilities and confidence in himself.

He knew that his ability with bat and ball was not on par with the other boys, but that he can contribute to the team in other ways. He willingly took the responsibility of organizing the matches and ensures that a team was available, and as faith would have it, that was the beginning of his journey as a cricket administrator, and his deep desire to contribute ultimately became his passion that spanned over the last three decades.

He brought that passion with him when he moved to the United States in 1986, and it didn’t take him long before he got involved with the Eastern American Cricket Association (EACA). He founded the Enmore Cricket Club in the EACA’s competition. As the President of Enmore Cricket Club for many years, he was eventually elected to serve as an executive in the EACA; the assistant Secretary Treasurer in 2004, and then as Treasurer in 2005 and 2006, and the association’s Vice President in 2007.

In his years in the EACA’s administration, Rudy served with integrity and demonstrated the ability to lead. Subsequently, he earned the confidence of the league’s membership, and was elected President of the EACA in 2008. Under Rudy Persaud’s leadership, the EACA has enjoyed successes in the New York City Mayors Cup, the Inter League Competition, and the U19 competition, and Rudy became a fixture and a notable face in the New York Region.

With a greater interest to promote cricket, Rudy became more involved in the administration of the sport in the New York Metropolitan area and the New York Region (NYR) particular, and he did so while sacrificing vital time away from his business and family. His was committed to progress and had a keen interest and vision in the grassroots development of the game. As such, he collaborated with other Leagues presidents to establish a New York Region U19 tournament. He exhibited an unwavering sense of purpose to ensure that the NYR U19 youth competition succeeds.

His determination became apparent when he took it upon himself to manage the EACA’s U19 team. His success as a manager earned him the stripes to manage New York Region Under-19 team to Florida in the United States of America Cricket Association (USACA) Regional championship. Success followed Rudy, and his U19 team brought back the championship trophy to New York.

Forging ahead, Rudy’s passion for the sport was canvassed on a wider spectrum when he led the organizing committee in the New York City Mayor’s Cup for four years in a competition that involved a team from each of the five boroughs. He worked tirelessly with the New York City Parks Department and other league Presidents to ensure the five Borough’s tournament was a success. The Queens Borough XI with EACA as the lead league won the championship three out of four finals.

The tournament was a grand success and it attracted the interest of many of the New York City’s political representatives at every level who came out to the games in support of their borough, and they showed an even greater presence at the finals. Rudy also served as the Secretary of the representative Guyana Team in the Ed Ahmad New York Cup tournament for several years. He has also been instrumental in the annual Guyana Inter-County cricket tournament for a number of years, and most recently in 2017. He has also successfully managed the NY Regional Team in the Annual MAQ T20 Tournament.

Rudy is a hard worker, and has been vibrant and diligent in administering cricket both at the club and league level for the past thirty years. As Chairman for the New York Cricket Region, Rudy Persaud has led with distinction and his firm focus on the development of the youths in New York Region took priority. Under Rudy Persaud’s leadership he has enhanced his League’s profile and involvement in the broader cricket community, and has placed the EACA as one of the leading Leagues in the NYR. He has extended himself unselfishly to help promote the game. Like so many before him who are often vilified for doing so, he just keep marching on administering cricket. In his own inimitable way, he took his challenges in quiet strides and remained pure and honest.

Rudy just did what any decent individual would do and continue to make his contribution by keep doing what is right, and never flinch in maintaining the discipline of the game. It revealed his class, one of those silent stalwarts who kept the game close to his heart. His leadership can easily be measured by his success over the years, however, his generosity is one that is unmatched. His generosity was demonstrated, in a financially stressed New York Region, when he delved into his personal funds on many occasions to assist the youths with their travel expenses so that they can travel to participate in national tournaments around the country. He ensured that the youths had everything they needed, and that they were guided in the right direction.

As an ardent admirer of game and a devoted administrator, and one who played cricket on the streets in Enmore, and then to higher grounds at Enmore Community Center. He never imagined that his work would one day be given the light under the sun in a culture where cricket for all its worthy endeavors are usually revered for the very talented. But for Rudy, the soul of the game is undoubtedly stored in a chamber carved in the hearts of those who find value at their local cricket club. However, his accomplishments were not guided by his hands only, but also by the wise counsel from many of his associates in the EACA to whom he expresses his gratitude, and none more special and dear to him than his beautiful wife for her support over the years that allowed him to do his work.

It is the work of many at the grassroots level who have made enormous contributions, and gave of themselves unselfishly for decades is truly that which defines the core of the game’s existence, and that which gives cricket its identity. For leaders like Rudy, it is that place which embodied the true spirit of camaraderie, sportsmanship and dedication. That place which encompasses the pleasantries of lifelong friendship nurtured along the way in the hearts of those who hold the game greater than themselves, and a brotherhood that exists in unwritten volumes for the mere preservation of the game.

And for a modest peaceful man who often appeared unfazed by the noise around him, and someone who does not dance easily in company, Rudy Persaud never anticipated that his tireless work in the cricket arena was shining somewhere, albeit, that Cricket accolades are often reserved for the elite few at the highest level of the game. But today, his diminutive figure stand on even shoulders with humility, simplicity and innocence towering on that elite platform of stalwarts, and the recipient of one of cricket most prestigious honor, an inductee into the United States of America Cricket Hall of Fame. It was an unbelievable journey to travel for Rudy Persaud, a servant of the game, who just wanted to help.