Saeed Ajmal: No Plans To Retire In Near Future

By Saj Sadiq
A veteran of 178 wickets in 35 Test appearances and 184 One-Day International (ODI) wickets from 113 matches, as well as an impressive 85 wickets from 64 Twenty20 Internationals (T20I), Saeed Ajmal has been struggling to find a place in the Pakistan squad after being cleared to bowl again by the International Cricket Council (ICC). Excluded from the Pakistan squad which is on tour in Sri Lanka, he is currently representing the English county Worcestershire in the hope of regaining form and confidence. 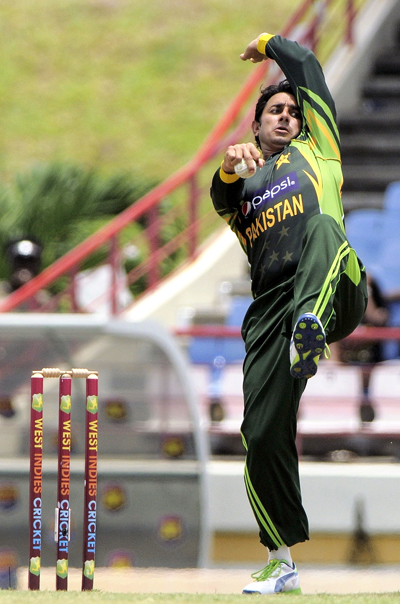 In an exclusive interview with PakPassion.net, thirty-seven year old Ajmal spoke on a variety of topics including his response to suggestions that he was a spent force in international cricket, the disappointments of missing the ICC Cricket World Cup 2015 and the tour of Sri Lanka, the quality of Pakistan’s spin bowling resources and the Pakistan Cricket Board‘s (PCB) proposals to hold a franchise based T20 league in the UAE.

PakPassion.net (PP) : According to some, you are now over the hill and a spent force. What do you make of such opinions?
Saeed Ajmal (SA): In Pakistan we have this habit of writing a player off after one or two below par performances. That player’s past performances are forgotten about and that player is written-off very quickly. The people who are saying I am finished and a spent force are wrong and these are the same people who said that my bowling action would never be cleared and that I would never play cricket again. I proved these people wrong about my bowling action and I will prove these same people wrong who are writing me off as a bowler. I’d also like to remind these critics that all of my bowling varieties have been cleared, not just some of them.

PP: Do you think the changes you have made to your bowling action have affected your confidence?
SA: Naturally any changes you make to your bowling action do affect you mentally and the process can take some time to sort itself out and to settle in. I’m not a youngster who is just learning the game, I’ve bowled the same way throughout my career and it’s not easy to suddenly have to make adjustments. I have to be patient and not panic. This is a process that requires me to have faith in my changed action and not to expect too much too soon.

PP: You have set yourself very high standards throughout your career culminating in a number-one ranking. Do you think it’s unfair to expect you to reach those heights again?
SA: That was me bowling and I am still the same Saeed Ajmal. I have every faith in my ability and I believe that I can be as good a bowler as I was previously. Yes my standards were high and there were some exceptional performances, but let’s be realistic, I cannot take five wickets in every match that I play in, which some people expect me to do. Every cricketer has ups and downs and has a bad patch and every cricketer has to come back stronger and that is what I am aiming to do, but let’s be patient and not panic if I have a couple of below par matches.

PP: Does it hurt not to be involved in Pakistan’s ongoing series against Sri Lanka?
SA: Absolutely, it hurts a lot. Playing for Pakistan has always been my number one ambition and to be out of the reckoning at the moment is tough to accept. However I have to accept that this is a tough time for me and I need to get amongst the wickets here in County cricket and who knows maybe another opportunity to play for Pakistan may come my way. My confidence is returning with each match that I play for Worcestershire and I think that within one month I’ll be back to my best and knocking on the door of international selection.

PP: Have any discussions been held between you, Waqar Younis and Misbah-ul-Haq about your international future?
SA: No discussions have been held. I conveyed a message to them to not pick me yet for Test cricket, but they ended up dropping me from all formats. But that’s their decision which I have to accept. They want match-winning spinners and at the moment I have a few issues to sort out with my bowling so it’s understandable that they will pick other spinners. But it’s nothing personal, it’s one of those things that happens. Nobody is indispensable and the onus is on me to find my form and confidence and impress the selectors, coach and captain once again and to win back their confidence.

PP: How difficult was it to miss what was probably your last chance to play in a World Cup?
SA: My dream was to play in the World Cup in Australia and New Zealand and my dreams were shattered by that ban. However there was nothing I could do about it. Yes it was disappointing, yes it hurt, but I have to move on and look to the future and not look back. Maybe there was something positive and some reason that was beneficial to me for me missing the World Cup. All I can do now is focus on the future and look to get back into the Pakistan team in all formats.

PP: Is this the end for mystery spinners and the doosra?
SA: Yes I think the ICC has clean bowled mystery spinners and put an end to them and their varieties, but I don’t think it’s the end of the doosra. My doosra was cleared during the tests and I intend to bowl it. I’m continually working on bowling the doosra again and I will definitely bowl it in future. It’s a delivery that I have not discarded, it’s been part of my armory and it will remain part of my armory in the future.

PP: For how many more years will we see you playing cricket?
SA: I have no plans to retire in the near future, in fact it’s not even crossed my mind. I will continue to play cricket as long as I enjoy it and as long as I am not a burden on the team that I am representing. If I feel that I am not worthy of playing for Pakistan, then I will retire from international cricket and continue to play domestic cricket around the world for another four or five years. My fitness levels are fine and my focus is on returning to the Pakistan team and retirement is not an option at the moment.

PP: Your thoughts on Yasir Shah and Zulfiqar Babar who have been your replacements since your ban?
SA: Zulfiqar Babar is a very experienced bowler who has done the hard yards in domestic cricket in Pakistan. He has been very consistent over the years and has performed well for Pakistan whenever he’s been required. He’s deserved his chance to play for Pakistan and I’m delighted to see he is making the most of this opportunity.

Yasir Shah is an intelligent and special bowler who has the ability to trouble batsmen all over the world on all surfaces, as we have just seen in Galle. I think both Zulfiqar and Yasir can perform well for Pakistan for at least the next three or four years. They seem to be getting better and better with each match and they compliment each other well as a pair.

PP: Are there any young spinners in Pakistan who have impressed you?
SA: Pakistan is blessed with spin bowling talent and we continue to produce some wonderful spinners. Usama Mir looks an excellent spinner with a bright future. He’s tall, has good control and variation and really impressed me in the recent domestic Twenty20 tournament. He’s young, he’s developing as a bowler and he needs guidance and good advice. He needs to be played in the Pakistan ‘A’ team and be allowed to develop as a bowler. It will take him a couple of years to polish his skills but I think he can be a future star for Pakistan.

PP: Raza Hasan and Mohammad Aamer are two young Pakistani cricketers who made bad judgements which affected their cricket careers. What advice would you offer young cricketers like Hasan and Aamer?
SA: The level of respect you get as a cricketer around the world is second to none. Look at the example of Mohammad Aamer, he had the world at his feet but threw it away. Sometimes when young cricketers in Pakistan who are from a modest background see the riches and fame involved in cricket, they cannot handle it. There are people out there in cricket who are ‘dirty’ and want to tempt the players by offering them riches and that temptation is too much to handle for some cricketers.

The PCB is educating players regularly and that is a good thing, but the PCB needs to keep a closer eye on players also, especially on overseas tours. I urge our cricketers to stay clear of fixing, drugs and other controversial issues which give players and their country a bad name. As a Pakistani cricketer the respect you have earned is because of your cricketing ability, don’t throw that away at any cost. Respect cricket, respect your country, don’t get too big for your boots and don’t get tempted to do wrong, whatever the temptations are.

PP: Umar Akmal has just completed a short stint at Leicestershire. Do you believe that more Pakistani cricketers should play County cricket in England?
SA: Absolutely. The pitches in England are very sporting tracks that provide assistance for bowlers and also if you are good enough they will allow you to score runs. The wickets in England will improve you as a cricketer as these are not dead tracks where you can plant your front foot down and smash the ball to all parts. A couple of seasons in County cricket can really improve you as a cricketer.

I believe that by playing County cricket you are giving yourself an advantage and a good grounding for international cricket. You are made to earn your wickets and runs and I would urge the PCB to allow more of our players to play County cricket and also club cricket in the United Kingdom. There aren’t enough ‘A’ tours for Pakistan and therefore it’s even more important that our up and coming players get some County and club cricket under their belt to prepare them for international cricket.

PP: The Pakistan Cricket Board recently announced that they will be holding their franchise-based domestic twenty20 league in UAE. Do you think that is the right decision?
SA: It’s great news that the PCB has announced this tournament, but I would have preferred for it to have been held in Pakistan. However the situation in Pakistan is such that the UAE is probably the better option at this stage. The most important thing about this league is that it will give our players the chance to play alongside and against world-class cricketers and will help those cricketers cope with pressure, which is currently a weakness of ours.

The Indian Premier League has helped in the development of young cricketers in India and I hope it’s the same for Pakistan cricket when this tournament is held. Playing in tournaments such as these with huge crowds is ideal preparation for international cricket and also the tournament will help players and the PCB financially.

(Saj Sadiq is Senior Editor at PakPassion.net, from where the above article has been reproduced. He can be followed on Twitter at @Saj_PakPassion)

The above article is reproduced with permission from PakPassion.net.