USA Batting Woes Continue As They Fall To Jamaica 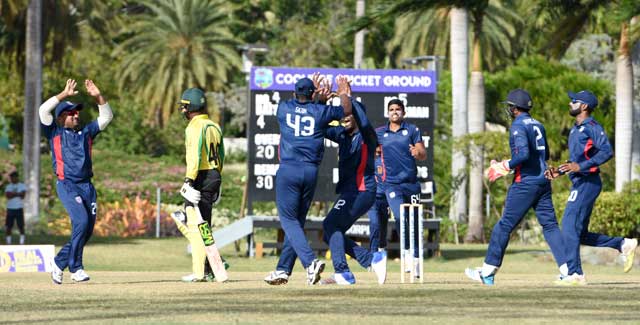 USA team celebrates the fall of a wicket.

ST. JOHN’S, Antigua– Nikita Miller played a Captain’s knock of 52 not out and took 2 for 27 for which he was Man of the Match, to save Jamaica Scorpions’ innings against USA.

Winning the toss and electing to bat first, the Scorpions playing without Chris Gayle, had 34 runs on the board before Chadwick Walton was caught behind off Elmore Hutchinson for 25.

Steven Taylor partnered with Rovman Powell for 41 runs before Taylor was run out for 22 and Powell was bowled soon after for 20. The Scorpions were 85/4 after 21.4 overs.

Fabian Allen and Andre McCarthy combined for 62 runs to rebuild the Scorpions middle order. But it was the partnership between Captain Nikita Miller and Odean Smith of 85 runs that took Jamaica to 255/8 from their 50 overs.

Nikita Miller and Odean Smith remained not out on 52 and 30 respectively. Elmore Hutchinson was the best bowler for USA, taking 3/40 from 10 overs.

USA Cricket had a shaky start to their run-chase. They lost Jaskaran Malhotra for 9 with the score on 24.

Xavier Marshall and Timil Patel fell in successive balls without either scoring. Leaving USA reeling on 25/3. But Sunny Sohal and skipper Ibrahim Khaleel started the rebuild.

Sohal went on to a top score of 65 before Nikita Miller had him caught by Andre Russell. Khaleel reached 37 before Andre Russell bowled him for 37.

The rest of the USA team couldn’t get the required runs, eventually all out for 156 in 49.1 overs. Handing Jamaica Scorpions, a 99-run victory.

Winnings the toss, Kent elected to bowl first. They had Hurricanes at 79/4 after 22.3 overs. That was until Terrance Warde rescued the Hurricanes innings. He top-scored with 71 which included 5 fours and 2 sixes.

Hurricanes were bowled out for 183 in 49.1 overs. William Gidman was the best Kent bowler, taking 3/31 followed by Ivan Thomas with 3/45.

Zak Crawley made the run-chase easy work for Kent as he smashed 99 not out. He was joined at the crease by Alex Blake who finished on 44 not out.

Daniel Bell-Drummond was run out by Terrance Warde for 39.

Zak Crawley was Man of the Match.