By Sam Sooppersaud
Cricket is a game that’s played by nearly all of the youths in Guyana. Whether it be soft ball, tennis ball, or hard ball cricket, the young men hang out at the parks, schoolyards, the less used streets, and whatever “open” lot they find, to play cricket. Yes, many are lured away to play soccer, but, there are enough youngsters interested in cricket that on any Saturday or Sunday morning, there are groups that come together and make up squads for that day’s “tournament.” I grew up in such an atmosphere of playing cricket. We played in the pasture, in the Girls’ Club Ground and in the streets. 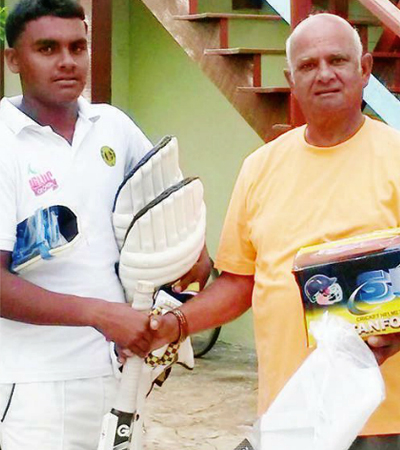 The cost of cricket gear is very high. Even in New York where our amateur cricketers play in the various leagues, the guys are finding that playing the game is costing them more and more each year. These are guys who work at different jobs, blue collar and white collar, and earn a steady salary. Yet, many are saying that good quality gear cost quite a bit of change. However, they are not complaining because they love the game, and are willing to spend their hard earned cash to pay for their fun.

If we in New York are finding it costly to buy cricket gear, imagine the plight of the cricketers in Guyana. To begin with, the cost of living in Guyana is “going through the roof.”  The so-called “well to do” is able to “get by.” They buy whatever personal gear they need, or, two or three guys in the club pool their money and buy their own “personal” gear. “Sorry pal, you can’t borrow our bat….,” may often be heard.

Teachers, civil servants, policemen, and those with regular jobs, budget their wages and salaries so that over a period of time they save enough to invest in a pair of pads, or batting gloves, or even a new willow. But, what of the laborers on the sugar estates and in the villages? By the way, right now in Guyana, there is more “street” cricket played by youngsters on the estates and in the villages, than in the cities.  How and where are these youngsters to get proper cricketing gear, if they are to become serious cricketers? Their parents “are barely making it.” Most likely, these young men are in school, with not enough extra cash around. So, sorry cricket is out of the question. Too expensive. Or, the kids switch to playing soccer. Only a ball is needed. They pool their funds together and buy a soccer ball.

If young cricketers in Guyana are to realize their full potential, then cricket lovers, fans, ‘do-gooders’, businesses and private citizens must find ways to help the kids. The business folks can offer part time jobs. private citizens can “spare a few dollars” here and there. The larger companies in Guyana for example, Courts, Banks DIH, Laparkan, and numerous other companies are, together, and individually, sponsoring various tournaments, large and small. The youngsters are grateful to these sponsors.

In New York, I am on a continuous mission to “get” cricketing gear for the youngsters back in Guyana. I concentrate on the young cricketers in the Canje District, Berbice. I would like to extend the giving to the other districts, but I am not able to secure enough gear, by way of sponsorship, to do so at this time. There are numerous individuals and sporting goods businesses that are constantly giving a helping hand.

On July 9th last, I visited Guyana, along with my wife Seiko, my daughter Vaneshree, grandson Amir and my son-in-law Rasheed.  Their visit was a planned vacation, and to attended two weddings while there, in addition to visiting relatives and friends, and places of interest.  My visit was two-fold. First and foremost, I went to watch the Caribbean Premier League (CPL). I had procured my tickets prior to leaving New York. However, excessive rain fell on the day of the Jamaica Tallawahs and Guyana Amazon Warriors game, and it was cancelled. The next day, July 16th, I sat in the Providence National Stadium and enjoyed the CPL St Lucia Zooks vs. the Guyana Amazon Warriors Twenty20 game, which Guyana won. On the 17th I enjoyed the Warriors and Barbados Tridents. The Tridents won that one.

The second purpose of my Guyana visit was to present gear donated in New York to youths in Canje, Berbice. A month prior to leaving for Guyana, I had sent a barrel via Laparkan with the gear I was able to get from various sponsors. The barrel arrived two days prior to my leaving to come back home to New York. I did my best to find youths who are seriously planning to make cricket a career. A ball or two, or a pair of gloves, or a pair of pads was given out “here and there.”

I was introduced to 15-year old young man, Alex Algoo. He lives at Canfield, Canje. He is a right-handed batsman who keeps wicket when needed. He also bowls medium pace, and presently plays for The Young Warriors Cricket Club, at Cumberland Village, Canje. He plays both for the junior and the senior teams. I had conversation with several senior members of that club, and they were all in agreement that young Alex has the potential “to go far” in cricket. Even at his tender age, he had already represented Berbice. He has an appetite for runs, according to club members.

I met Alex the day before I left Guyana, Wednesday, July 22nd. He is a quiet young man very respectful. He told me that he wants to make cricket his career. He has told his parents of his desire, but they like other working people, are not in a position to provide him with “the tools” for his chosen sport. His immediate ambition is to represent Guyana at the Under-15 level. He said he would practice hard so that when opportunities arise he would be ready.  Another dream of his is play for the West Indies Under-19.

I had a conversation with Mr. Anil Beharry, the President of the Berbice Cricket Board. He fully assured me that young Alex who takes his cricket very seriously, works works hard to get “game ready.” Before leaving Guyana, I presented young Alex Algoo with a cricket bat, a pair of batting gloves, a pair of batting pads, a thigh pad, an arm guard, and a batting helmet.  However, the batting gloves “did not feel right,” so I have arranged for another pair to be sent to him.

There is another young man from the Canje District who has great potential. His last name is Hetmeyer. I do not remember his first name. He has represented Berbice, and from information received, the Guyana Under-17, as well. He was in the Guyana Amazon Warriors squad for the 2015 Caribbean Premier League. I would be working towards getting him some sponsorship from New York. I need the help of cricket lovers in New York, to achieve this goal.

The youngsters are very grateful for the gifts of cricket gear, and I, would like to thank all those who have contributed to this worthy cause. Special thanks to Ricky Singh of Singh’s Sporting Goods, in Queens, NY, Ravi Etwaroo of CricketZone USA, in the Bronx, NY and Chub Bedessee of Bedessee Imports, in Brooklyn, NY, as well as and Dr. Sham Ali. They have all sponsored the much needed cricket gear that may very well be the catalyst, by which that a few young cricketers may be led to greatness.

I am appealing to all cricket lovers to help the youngsters in Guyana realize their dream of being cricketers. Not all may succeed to the top, but at least they will have had the opportunity to compete in game that they love, and that we all love.

You may contact me through this site, or  call me at (646) 363-5063, or e-mail me at Ssamrajs@verizon.net Any donation of cricket gear would be greatly appreciated.